The Lord of the Rings Minecraft Mod Wiki
Register
Don't have an account?
Sign In
Advertisement
in: Renewed feature, Biomes, Islands, Environment

Islands are small biomes in the north-western part of the Sea. This page specifically focuses on the only three pre-generated islands in the sea, located in the northern part if the Belegaer, west of Forlindon, as shown on the map. There are numerous other, smaller islands, but those are all generated randomly and not shown on the map.

There are three main island biomes defined by and presented on the map:

Each of these islands has its own waypoint location for fast travel, which can be unlocked by visiting the sea.

In addition, there can be smaller randomly-generated island biomes in the ocean. These are not marked on the map, and are usually no more than a few hundred blocks or so in width. There is also a secret island more to the south: Meneltarma. It is hidden on the map until it is discovered by the player and has its own sub-biome.

The island terrain is quite similar to the Eriador biomes, including trees and lakes as well as fruit trees. Since no NPCs live here, and there is no risk of invasion, some players have found these biomes well-suited for base grounds on servers.

In the Renewed version, the islands have far fewer lakes. The ground also includes much more rocks, and the grass is a much duller shade of green, compared to in the Legacy version. This is more consistent with the Islands' history (see below) of being the summits of old mountains.

For a time in the Second Age, the islands were used by the Noldor and Sindarin Elves as a safe-zone from the Enemy. But in time the inhabitants departed for the Undying Lands and Númenor, and the islands were left deserted. Since the late Second Age, nobody has ever lived on them for any considerable amount of time.

Even though no one lives here, there are still remains of Númenórean and Elven colonies.

One can also stumble upon various types of smaller ruined structures on the islands and beaches.

Islands are an excellent place to find Rock Salt, which is more common here and in other Sea-related biomes than anywhere else in Middle-Earth. It is two and a half times as common underground, and additionally can be found in stone at levels up to Y=80, as opposed to most biomes, where it only generates up to Y=64.

These lands are either grassy plains with a light wood or thick forests. The land is montane, containing more spruce and oak trees than other species, but the occasional beech does grow. Like in most biomes, willow trees do grow near water. Flower and grass growth is average. In the tropics, palm trees inhabit the shores and inland part if the islands. The three northern islands are not in the tropical zone. 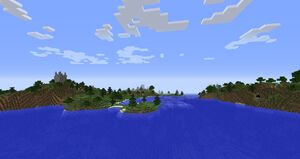 The old official screenshot of islands and the Sea. 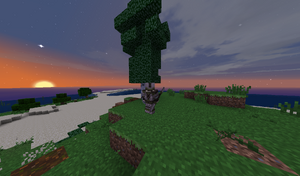 A sunset on an island in the middle of nowhere. 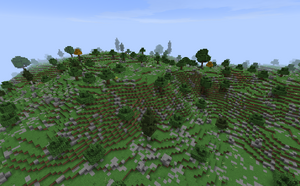 An island off the coast of Gondor 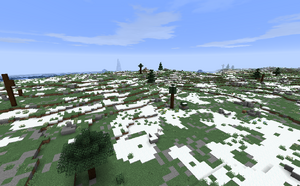 An island north of Lindon, showing the effect of latitude on island climate in Renewed

Glflegolas did a regional spotlight on the Island biome, which may be found here, and also one on barachoises, which can form on beaches and may be found here. If you plan on visiting, make sure to check both of those out.