Khamûl's Fire is a device similar to an Orc bomb, except for the fact that it is dangerous in different ways. When used, Khamûl's Fire will explode instantly, spreading orange-blue flames around the area. The fire burns down both wood and stone at a speed far faster than vanilla fire.

As the tooltip for it says, Khamûl's Fire is very volatile. It will explode if you drop it from any height, shoot it with an arrow, if you send it a redstone signal, and if you use flint and steel on it. It will also explode if you place it near fire. It is recommended that you use extreme caution when messing with it, and that you keep it away from sources of ignition.

In Beta 33, Khamûl's Fire was buffed to increase its potency as a weapon.

According to SmileBC,, Khamûl's Fire can also launch players in the air.

Khamûl's Fire is crafted like so, on a Rhûnic crafting table:

In mod lore, Khamûl's Fire is a deadly device, similar to the legendary Greek Fire (legendary, so not the historical one used by the Byzantines). It was devised by the Nazgûl Khamûl the Easterling, using Sauronic industry, as a device to burn through most substances, even stone. He then taught it to the Easterlings of Rhúdel for their use in war. 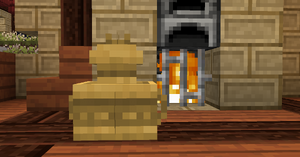 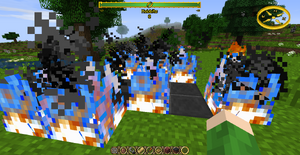 Strange Fire ...
Add a photo to this gallery
Retrieved from "https://lotrminecraftmod.fandom.com/wiki/Kham%C3%BBl%27s_Fire?oldid=585069"
Community content is available under CC-BY-SA unless otherwise noted.