The Lord of the Rings Minecraft Mod Wiki
Register
Don't have an account?
Sign In
Advertisement
in: Biomes, Rhûn, Environment, Deserts

The empty and lonely lands of the Last Desert, where no men are.

The empty and lonely lands of the Last Desert, where no men are.

The Last Desert is a desert biome situated in the Far East of Rhûn at the northern base of the Mountains of the Wind just above the Harhûdor sub-continent. It differs from other desert biomes in that dirt is frequently found here amongst the sand dunes. Sparse vegetation and short grasses are also occasionally found here. Cacti, however, are rare.

Upon venturing into the perilous Last Desert the player earns the achievement "Eastern Sands".

No structures -- even not a single stone ruin -- generate in the Last Desert, as none live or have lived here.

No factions are present in this biome, and therefore no NPCs are to be found here. However, under the shade of night, hostile scorpions emerge. In the future, the Last Desert may become home to the legendary Were-worms.

Mining and ore occurrence in this biome is standard. However, a layer of sandstone rock is to be found below the desert's sands and topsoil.

Vegetation is sparse in this arid landscape, though cacti, short grasses and dead plant-life can be seen throughout. Dead trees scatter the landscape. 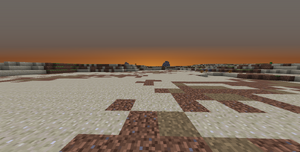 The sun is setting over the Last Desert.
Community content is available under CC-BY-SA unless otherwise noted.
Advertisement