The Lord of the Rings Minecraft Mod Wiki
Register
Don't have an account?
Sign In
Advertisement
in: Renewed feature, Food, Vegetables,
and 4 more

Lettuce is a food item farmed by various factions across Middle-earth. It is eaten by Hobbits, Elves, and the Men of Dorwinion, Rhúdel, the Southron Coasts and Harnedor.

Eating one lettuce will fill 3 (

) hunger points. It is not used in the making of any other foods.

Lettuce can be found in the chests of various structures, including hobbit holes (in the larders), halls of Lindon and Rivendell, and the houses of the Rangers, Rohan, Gondor and Near Harad. It can also sometimes be found and as a crop in the farms of these factions.

Lettuce can be bought from the farmers of the Hobbits, the Taurethrim, Gondor, Rohan and Rhúdel, as well as the greengrocers of Gondor, for 2-4 (

Lettuce can be planted on farmland and grown as a crop in the same way as other seedless crops like carrots and potatoes are grown. Be mindful where you plant them however, as rabbits lucky enough to find them (with easy access to the farm) will attempt to eat them. 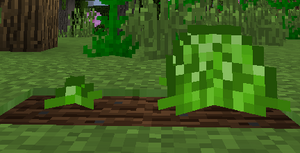 Animation showing the lettuce model in the renewed version.
Community content is available under CC-BY-SA unless otherwise noted.
Advertisement