watch 02:39
The Loop (Games)
Do you like this video?
This feature is present in: Renewed, Legacy.

Maple Trees are trees found abundantly in the lands of the North, whose colourful leaves make for a wonderful scene, and are a source of maple syrup.

These trees are most commonly found in Chetwood, but are also occasionally found in other regions of Eriador, such as Eriador itself, the Trollshaws, Coldfells, and the Lone-Lands. They are also found quite commonly in Dale and the Red Mountains.

The leaves of these trees are a beautiful hue of red or orange. Their bark is grey-brown, and their planks and other products are a pale colour. Since Public Beta 29, it's also possible to grow a Party Tree by planting 3x3 saplings and using bonemeal on the saplings.

Maple wood logs can also be combined with a wooden bowl on a regular crafting table to yield a bowl full of delicious syrup. This can later be put on pancakes to make a sweet treat or brewed with wheat in a barrel to get some delicious maple beer.

Like all other trees, maple trees have a chance of dropping saplings when its leaves break. 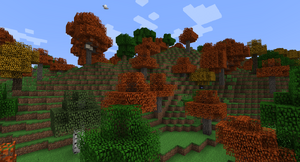 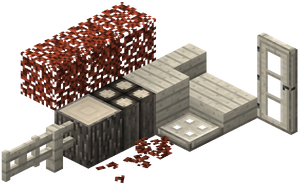 Add a photo to this gallery
Retrieved from "https://lotrminecraftmod.fandom.com/wiki/Maple_Tree?oldid=634633"
Community content is available under CC-BY-SA unless otherwise noted.