The Lord of the Rings Minecraft Mod Wiki
Register
Don't have an account?
Sign In
Advertisement
in: Renewed feature, Gameplay

The Middle-earth menu is one of the most important GUI's found in the Lord of the Rings Minecraft Mod, which can be accessed by pressing 'L', unless you changed your key bindings. Here, you can find all sorts of useful information as it pertains to the mod. The menu has multiple sections that can be accessed by clicking the different buttons, or by typing a second letter depending of the desired section. Each section has a 'menu' button, to get back to the main menu or just hit 'L' again.

In the renewed version, the menu was added in Renewed Snapshot 2.8 with only the factions and map sections present. It is opened by pressing 'M' instead of 'L' as that key is used for the advancements menu in the newer versions of Minecraft.

This section is accessed by typing 'A'. Here, you can see the various achievements you've collected, as well as how to get ones that you've not obtained yet. They are organized in categories. There are scrollbars to the top and the left to access the several hundred (!) different possibilities. How to use them is described in more detail on the achievements page. 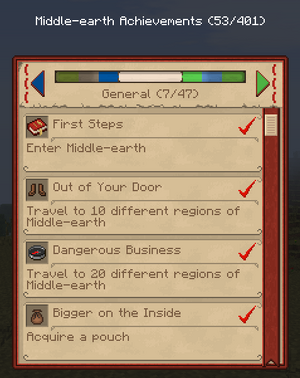 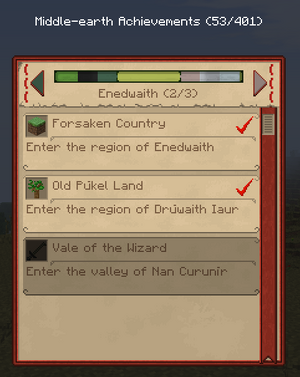 This section is accessed by typing 'M'. Arguably the most useful section of the Middle-earth menu, the map is possibly the most confusing to use. It displays where you're located, the names of regions when you put the cursor over them, and allows you to fast travel. You can zoom in and out using your scroll wheel, or the small plus/minus keys on the top left hand corner of the map. In the renewed version, the zoom level is displayed on-screen, and by holding left shift you can zoom/pan more finely. You can also zoom/pan more quickly by holding ctrl. Renewed Snapshot 3.0 added a 'border' effect to the coasts of Middle-earth and Renewed Snapshot 4.7 added a 'fog of war' effect that covers up areas you have not yet explored (which can be turned off in the configuration file). 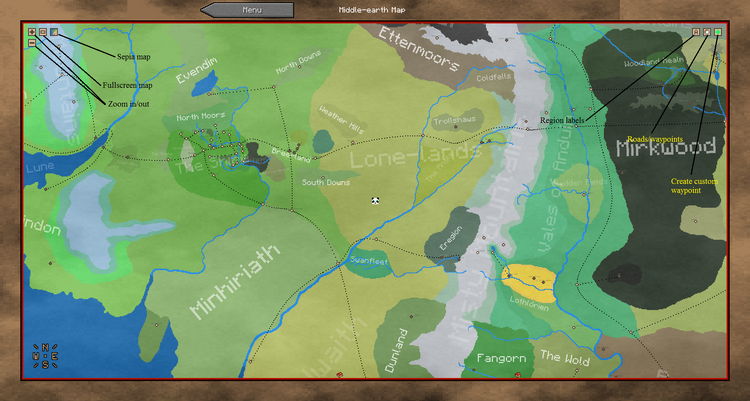 Pressing the sepia button in the top left corner, turns the map into a sepia colour, which some players might prefer. 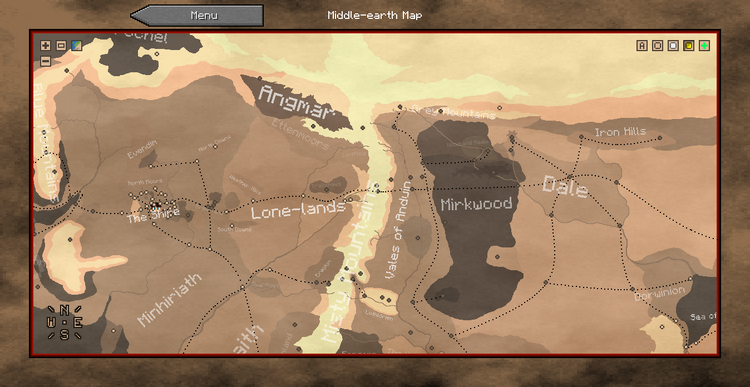 If you are more the traditional kind of player, or a fan of that game, you might rather prefer the Old School RuneScape type of map. To check it out, you have to set your configuration file accordingly and restart your minecraft game. This map type has no sepia version, the related button is defunct then. 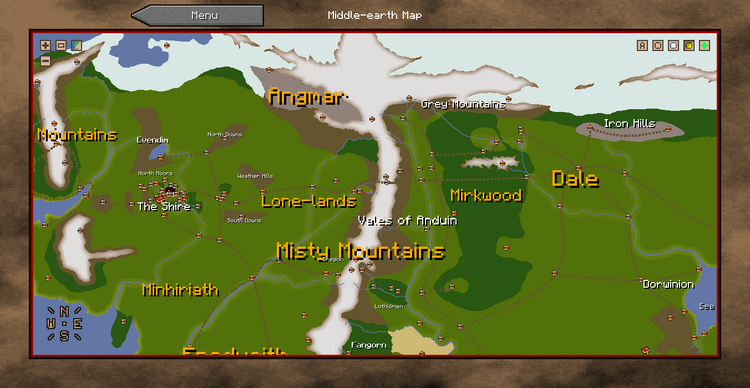 Pressing the fullscreen button in the top left corner, allows you to display a smaller version of the map. 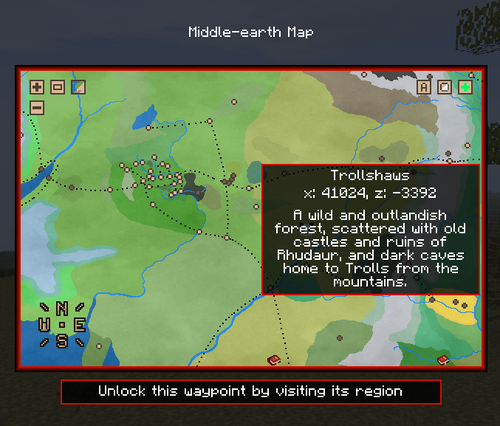 The buttons in the upper right corner all deal with waypoints and are described in detail on the waypoint page. There are some predefined waypoints, there may be some shared by a fellowship, and some custom waypoints created by yourself.

Clicking on a waypoint gives you the name of that waypoint, along with some information about the area. If the waypoint is not unlocked, it will state so clearly. If it's available, pressing 'F' will allow you to fast travel to that waypoint. 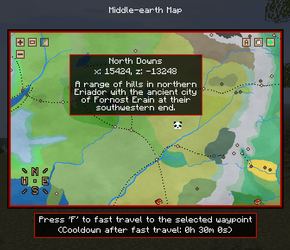 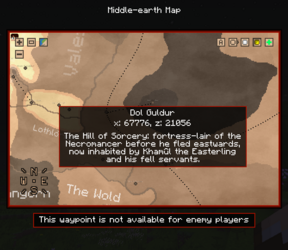 In the renewed version of the mod only, there are also 'map markers' that can be added to the map but not fast-travelled to, in order to mark useful locations without creating a full waypoint (which now require a physical structure to create). These can be created by clicking the button in the top right of the map that shows a black cross with a small green cross in the corner and then left-clicking anywhere on the map. You can then change the name and icon of the marker as shown below. Markers can be deleted after creation by right-clicking them. You can also toggle whether markers are visible by clicking the other button that shows a black cross.

This section is accessed by typing 'F' and deals with inter-faction relationships. The top always shows the alignment meter. You can access three different regions by pushing the button at the bottom: Westlands, Rhûn, and Harad. Then change the faction whose details you're looking at, by sliding the slider above it to either the left or the right. 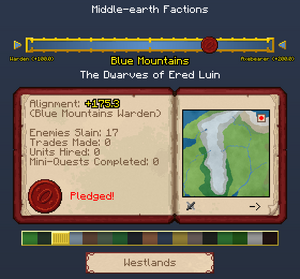 The opening page will display a number of stats pertaining to that faction, including your alignment, your current rank, the number of enemies you slew, the number of times you traded with the faction, the number of units you hired, and the number of mini-quests you completed. To the right, there is a map of their homeland, and below it, an icon indicating, if that faction encourages war crimes (killing innocent enemy civillians) or not.

Also you have the opportunity to pledge your service to that faction, if you earned enough alignment to them, or break your pledge, if you swore already an oath. 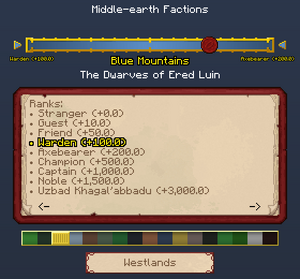 By clicking on the lower left and right "corners" of the book (near the arrows), you can scroll over to additional screens and learn more about that faction. If you push the region button now, or use the slider, you'll see the exactly same screen for another faction.

The first screen shows all possible ranks of it, your current rank highlighted. Some may just be shown as "???", which means, that these ranks are only available for pledged players. In the option section (see below), you can select if ranks use the male or the female variant (Lord/Lady etc.). If there are more ranks than fit the page, a little slider is added at the right side, to access the rest. 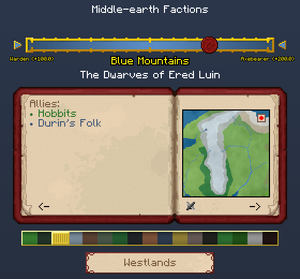 By clicking on the "corner" again, you'll get to the screen, which show the faction's allies and friends. If there's not enough space, to hold them all, a little slider is added at the right side, to access the rest. 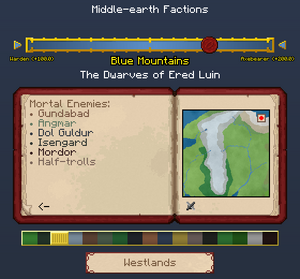 The next screen provides information regarding that faction's enemies and mortal enemies. If the screen runs out of space, a little slider is added as usual.

Whenever the factions map is shown on the right side, a small red "plus" sign is displayed in the top right corner. This button will not be shown, if the function is turned off by using the following command:

By clicking on the button, you'll be able to see that faction's areas of influence on the Middle-earth map. To return to the faction pages, hit <ESC> or 'E'. Typing 'L' brings you back to the Middle-earth menu.

Note, that there might be areas outside the areas of influence, but still inside the native biome of that faction (for example the northern part of the Blue Mountains around the waypoint "Arvedui's Mines").

The function of this button is unknown. Probably, it's a placeholder for future extensions.

This section is accessed by typing 'P' and allows you to interact with fellowships. For more information regarding how these work, please see the relevant wiki page. 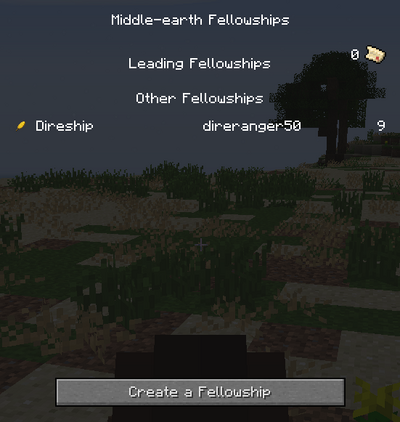 This section is accessed by typing 'T' and allows you to set a title. It presents you with a list of titles that you can claim, as well as your currently selected one. Use the slider to the right to scroll through the list.

You can only use the titles shown in white initially, but you can unlock others in time. Colours are customizable by clicking on any of the colours seen on the bottom row of colours. The titles are shown in front of the player's name in the chat. That's mostly interresting on multiplayer servers. 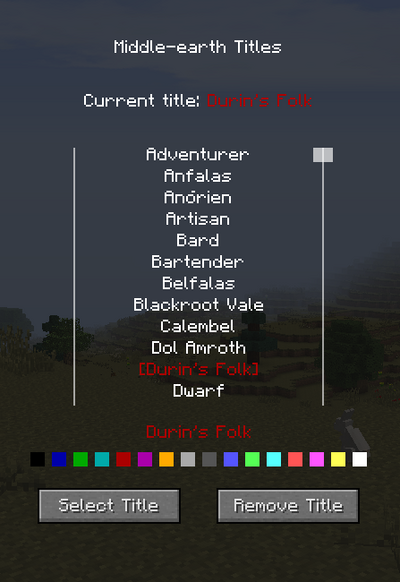 This section is accessed by typing 'S' and allows you to set the cosmetic shield worn by your character, if one's available. You can toggle between alignment, achievable, and exclusive shields using the toggle, and select the shield you want to wield using the small arrows on the left and the right. To wield a shield, hit "select shield", and "remove shield" removes that shield. 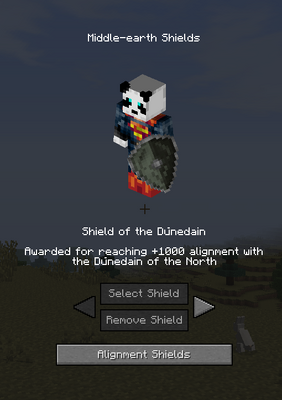 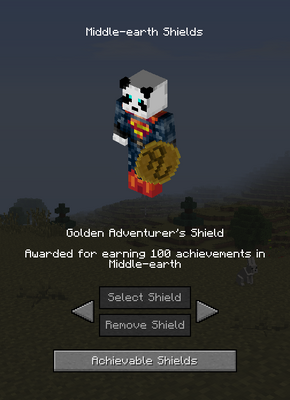 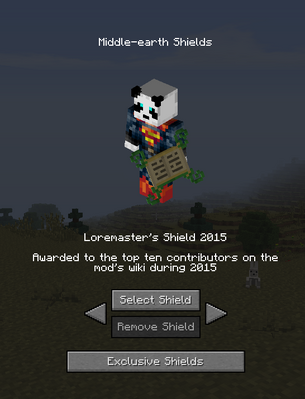 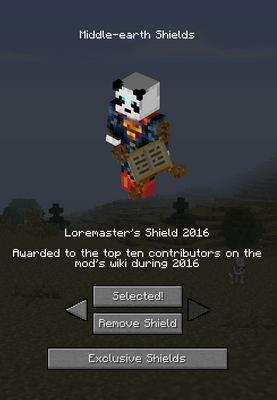 This section is accessed by typing 'O' and presents a menu where you can set a few of the mod's basic options. You can change these options simply by clicking on the button, which will cycle it from "On" to "Off". 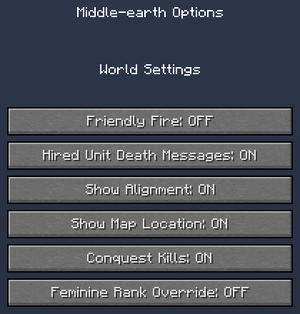