The Lord of the Rings Minecraft Mod Wiki
Register
Don't have an account?
Sign In
Advertisement
in: Staff, Moderators

View source
watch 02:52
Roblox: DeepWoken - The Loop
Do you like this video?
Play Sound

Mevans, also known as Eru Ilúvatar, is the most amazing person in Middle earth. He can walk on air, take on Chuck Norris (and win) and is the only person Kim Jong-un and Vladimir Putin take advice from. He can turn the sun off by snapping his fingers, can make rain stop, and make whatever he wants happen (in Middle-earth).

Okay, we might have been joking a bit. Mevans is the code master that first created the Mod. Development of this mod started on December 11th, 2012, and has continued to the present day. As of 2017, Mevans is the only one who codes the LOTR mod, although the Facebook page is moderated by another group of individuals. Interestingly, he shares a birthday with this mod. Many users have taken this to mean February 1st, the day the first Beta was released, but this actually means December 11th, the day he first started coding the mod, and set in motion the events that led to this Wiki.

On the Wiki, Mevans is known as LOTRMod, and the only head admin on the wiki, until January 25, 2016, when he temporarily left the wiki and made MG a secondary head admin. Just like all the other mod developers he holds an exclusive shield with a symbol of the One Ring printed on it.

As of 2017, he also holds the 2015 Loremaster's shield, and the Loremaster title. His Minecraft username is ChildWalrus, and he can sometimes be found playing on the official LOTR server. He has a unique title, as well -- Eru Ilúvatar.

He now uses black magic; the once lag-filled (official) server is now lag-free. How he gained this information, nobody knows. All that is known is his level of worshiping has grown dramatically.

He is well known for posting memes on the Facebook page.

Mevans is also the creator of the Lion King mod, a mod based off of the classic Disney movie.

Mevans is also great at playing the piano, and has posted a video of him playing "Rhapsody in Blue" magnificently. 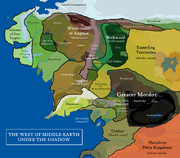