To keep track of your quests, it is recommended that you use the Red Book, as it records the details of all your currently active mini-quests. It is given to the player by the Grey Wanderer but can also be crafted (see recipe to the left), so don't worry about losing it.

Possible quests are indicated by a faction-related coloured exclamation mark hovering above a NPC's head. When you right-click the NPC, a panel pops up on the screen that gives you the choice to either accept or decline the quest (provided that you haven't already reached your quest limit). It also provides a description of the quest. Pressing the ‘Decline’ button will not result in any penalties.

Note, that the possibility to give out quests in general and bounty quests in particular can be disabled using the configuration file.

Once you have done your deed, return to the NPC who offered you the quest (making a custom waypoint near them can help with this). They will take the items you gathered for them (if applicable) and give you some reward in return – most often alignment with their faction, the exact amount depending, of course, on how difficult the quest was to complete and also on the mood of the quest-giver. Silver coins and achievements are also awarded. You might also get a pouch, armour pieces or Lore texts from completing mini-quests.

Some NPCs in particular will become a hired unit when their quest is completed. These are the shieldmaidens of Rohan, the renegades of Gondor and the brutes of Bree-land (which uniquely have no alignment requirement to command).

Currently, there are five main types of mini-quest in the mod, each of which has multiple quest possibilities (except for the tutorial).

These quests most often require you to kill enemies of the NPC who is giving the quest. For example, a Man of Rohan may ask you to slay a certain amount of Uruk-hai or Dunlendings, but will never ask you to kill Mirkwood Spiders. When you don't mind getting negative alignment with factions, and you want a lot of alignment with the faction you play as, this is the easiest way. Because: you get alignment for every enemy you kill already, but on top of that you also get +1 when doing a quest which can, with the right quests give you 150+ alignment.

Pickpocket are a type of quest specific to the spies found mainly in Bree-land. To successfully complete this quest, you have to sneak up on several different Bree-landers and attempt to pick their pockets. This is done by right-clicking on them with an empty hand while they are not looking - if they are the following chat message will appear:

You can't pickpocket someone who is looking at you!

Similarly if they are in combat, the following message will appear:

You can't pickpocket someone who is fighting!

If you are successful (there is random chance to 'miss'), a particle effect that looks like the target dropped several coins on the ground will appear and you will receive a "stolen item" (normally something like a coin, nugget or piece of pipe-weed) to hand back to the Ruffian - each stolen item is specific to a particular Ruffian quest, so they can't be stockpiled and used for others. Stolen items can't be sold and stolen coins can't be used in trading, or exchanged.

If the victim (or a nearby NPC) notices your attempt (successful or not), they'll be very angry (shown by a cloud particle above their head) and it might alert others nearby as well. If you are noticed, you will lose 1 alignment with Bree-land.

Completing a pickpocketing quest will award some coins and Isengard alignment if the player doesn't have negative alignment with them. Pickpocketing for the first time will grant the achievement "What has it Got..." and the title "Pickpocket". Completing a pickpocket quest for the first time will award the achievement: "Dodgy Dealings".

Bounty quests are a type of quest specific to multiplayer. These quests, given out by NPCs, send you in a dangerous mission to kill another player. You can talk with friendly NPCs (or spies...) to find out where your bounty is. Perform the deed and return to your quest giver to receive your reward.

How the bounty system works: When a player kills too many NPCs, near or inside a faction's Sphere of Influence, they will be put in a 'Wanted' state by the said faction for a time. Then, quest givers from that faction will start handing out quests to kill the Wanted player. There's no time limit to kill the player with a bounty on its head, but beware, for if another bounty hunter claims the kill first for the faction, you will fail the quest. If the target player is killed under normal circumstances - or killed for another faction's bounty quest - your quest won't be affected.

A simple tutorial quest is included in the mod, driven by the Grey Wanderer and described in detail on his page.

This section explains how to optimally profit from quest rewards. Of course, we all hope this will encourage players to optimally enjoy the immersive aspects of the mod (and not encourage the cowardly, lazy and oh-so-un-lotr-mod ways of '(trap-)grinding').

Note that the nasty habit of skirmishing between Orcs does not interfere with either of the above 2 methods. Orcs involved in active quests are exempt from skirmishes with their 'friends', but can still be killed by enemies, accidents and other players on servers. 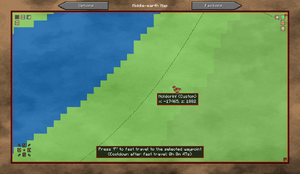 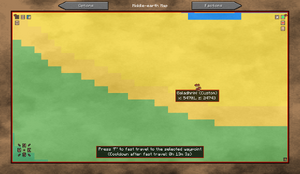 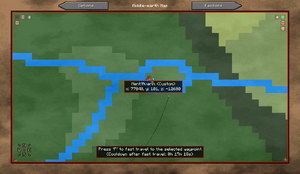 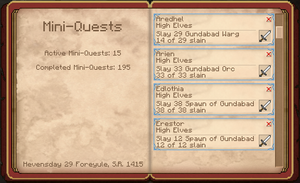 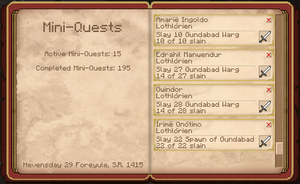 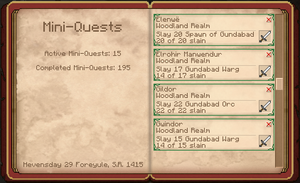 Retrieved from "https://lotrminecraftmod.fandom.com/wiki/Mini-quest?oldid=629627"
Community content is available under CC-BY-SA unless otherwise noted.