The Lord of the Rings Minecraft Mod Wiki
Register
Don't have an account?
Sign In
Advertisement
in: Equipment, Items, Mordor,
and 3 more

The Mordor Warscythe is a unique weapon wielded by the Orcs of Mordor. Stat-wise, it has properties that are equal to an Elven Battlestaff. It is worth noting that Gundabad Orcs have a slim chance of wielding this scythe, too, since they can use weapons of Mordor.

This warscythe can be obtained by looting most of the various structures of Mordor, such as the Mordor Tower, or by crafting it in a Morgul crafting table as shown below.

The Mordor warscythe deals 6.5 damage, similar to a Mordor scimitar. Its attack speed is slightly lower than a sword, at 68%. The increased range is proven to be useful, as it is 150%.

The warscythe offers no additional functions other than being used as a melee weapon. It cannot be thrown, due to its shape.

It is essential to use this weapon at long range. Make sure you do not get too close to your opponent, especially if they have a dagger, or you will get butchered. At long range, a dagger or even a sword is no match for the warscythe. Mounted combat, especially on Wargs is recommended, as the extra range and knockback will make it much easier to defeat another player. In addition, it's fairly inexpensive given its damage and range. 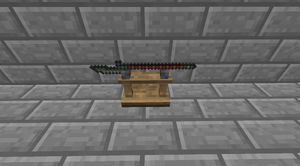 A Mordor Warscythe on a weapon rack 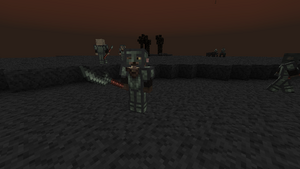 A Mordor Orc wielding a warscythe.
Community content is available under CC-BY-SA unless otherwise noted.
Advertisement