The Lord of the Rings Minecraft Mod Wiki
Register
Don't have an account?
Sign In
Advertisement
in: Food, Soups, Items,
and 2 more

Mushroom stew is a vanilla food type made of, as the name suggests, mushrooms (red and brown).

Mushroom stew can be obtained by “milking” (right-clicking) a mooshroom (bovine animal found in the overworld) with an empty bowl. The bowl will be filled with the mushroom stew.

(No Mooshrooms spawn in Middle earth)

If a stack of bowls is used on a mooshroom, only one bowl is filled, and the mushroom stew will go into an empty inventory slot, or be dropped if the player's inventory is full.

A bowl of mushroom stew restores 6 (

The bowl is returned to the player empty after the stew has been eaten, and can be re-used to craft more. 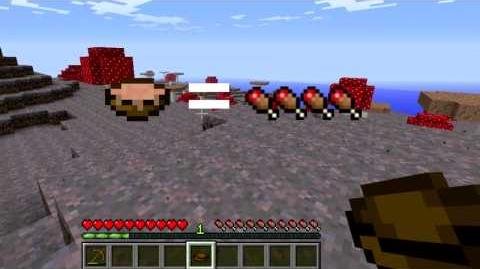 The video shows how to make mushroom stew.