The Lord of the Rings Minecraft Mod Wiki
Register
Don't have an account?
Sign In
in: Factions, Near Harad, Evil,
and 3 more
English

Edit
watch 02:23
Wiki Targeted (Games)
Do you like this video?
Play Sound

The Southrons of Near Harad are the swarthy men of the great Southlands, mostly isolated from the Westlands of Middle-earth. For thousands of years, they have been at odds with their northern neighbours, the Gondorians, and they have sworn allegiance to Mordor for the war that is to come. They worship the Dark Lord, known to them as Mulkhêr the Excellent, and his enemies are theirs. This faction is split into five distinct sub-factions.

The Harnedhrim live in Harnennor, the northernmost of the Southron realms. Once, they lived in Harondor to the north, but they were driven out of their homeland by Gondor millennia ago. They are a warlike and vengeful people, and they remember well the countless injustices they suffered under Gondorian rule. The Harnedhrim aren't as advanced as some of the other Southrons, but they have a fierceness and devotion to their cause that few Haradrim can match.

The people of Umbar in the west live in the most powerful of the Haradric realms. The city of Umbar itself is the greatest in all of Haradwaith, built by the Númenóreans in days long past. Black Númenóreans once ruled over Umbar, and though they're long gone, the lords of Umbar continue to follow their traditions, and the Umbarians still see themselves as the most "civilised" of the peoples of Harad. This realm is infamous as the home of the Corsairs of Umbar, barbaric pirates that plague the Bay of Belfalas.

The lands around Umbar, the Southron Coasts, are home to the coastlings, the most numerous of the Southrons. The Coasts are home to many great city-states with rich histories, most notably Ain an-Ahar and Ajtiaz an-Ahar. The Coast Southrons are skilled warriors, but their kingdoms are less inclined to war than those of their Harnedhrim neighbors, as they instead seek to imitate Umbar in becoming wealthy and powerful.

In the lands of the Gulf of Harad live the Gulfings, a harsh people known for their undying devotion to Mulkhêr and their use of Mûmakil in warfare. Their culture is unlike that of the other Southrons, with a focus on live sacrifices and constant displays of devotion to the Dark Lord. The Gulfings are also known as master traders, and their kingdoms have long grown wealthy off trade with the Morwaith, their fellow Southron realms, and other peoples from the Far East.

The Half-deserts that border the Southron realms are home to the nomads, an insular people that follow traditional lifestyles that the other Southrons long ago abandoned. They mostly keep to themselves, but there are many merchants among them that trade regularly with the other Southrons. Those travelling in the desert regularly seek them out, as they know a great many valuable secrets.

The ancestors of the Haradrim were Men who awoke in the First Age, but stayed to the East of Middle-earth instead of joining the migration of the Edain to the West. These Haradrim came south in three groups, fleeing the Shadow for the Sunlands, where the Sun is fierce and there are no clouds. One of these groups, the Desert People, settled in Near Harad, and became the ancestors of the Southrons. In the early Second Age, these men were dominated by the Dark Lord Sauron. Under the authority of the Lord of the World, numerous towns and walls of stone were built, and those under his influence became numerous and armed with iron. To the Southrons, the Dark Lord was feared as a king and god.

During the Second Age the Men of Númenor built a great city in the firth of Umbar, a vast natural harbour on the southern shores of the Bay of Belfalas, which they eventually turned into a fortified citadel. The Men of the Sea initially helped the people in the lands they explored, teaching them of agriculture and craftsmanship. But after the reign of Tar-Ciryatan, the Númenóreans set themselves up as lords in Middle-earth, demanding tribute of goods and wealth. Under Ar-Pharazôn, the Númenóreans made war on the Men of Middle-earth, enslaving them. When the Great King Mulkhêr challenged them for the freedom of the Men of the Desert, they took him to their evil land, and those that remained grew all the crueler, taking men to sacrifice and even to devour. But storms out of the West came with great ferocity, and in the distance smoke billowed. And on a black day of wind and water, a great wave came out of the deeps of the sea, and the coasts were sundered, to the ruination of the sea-men and coastal peoples.

In the following century, the Southrons were led by the Dark Lord and Black Númenóreans, those Sea-Men who stayed in Harad and survived the rising of the Great Sea. The Haradrim were enemies of the heathen men of Gondor, as the Kingdom's southern borders were close to their lands; and the Dark Lord stirred them to strike while their foes were still weak. Shortly before the War of the Last Alliance, two Númenórean lords, Herumor and Fuinur, rose to great power amongst the Haradrim and led them to battle upon the Dagorlad, against the evil Men and Elves of the North who sought to battle the Lord of the Earth.

After the fall of their Lord, the Southrons continued to wage war against the Realms in Exile for many centuries. The Black Númenóreans at Umbar held great power, and Gondor could not yet contest them. There were dealings between the Southlands and Gondor in these days, though it is said that there was never friendship between the two realms. But in the year T.A. 933 the black-sailed fleet of Gondor came out of the West and took Umbar, driving out its people. The city was then the site of many battles between the Haradrim and Gondor, and one of the many kings of Gondor was slain when Black Númenóreans besieged the city. However, these efforts but aroused the wrath of the Gondorians, and their great king, the South-slayer, laid ruin to the coastlands and forced into vassalage the independent kings of Haradwaith.

The Gondorians lost Umbar when one of their lords rebelled against the King. Haradrim re-entered the city and aided the rebels against Gondor. One of Gondor's kings was slain in battle, but his son once more defeated the Haradrim. Umbar was continuously controlled by the rebels until T.A. 1810, when the navy of Gondor rose one last time and attacked the city. The rebellions were finally ended, but Gondor's victory was short-lived, for the Haradrim, though engaged in wars among themselves, retook the city. Gondor has never since gained control of the great ports of the South. Around that time, the Haradrim made an alliance with the Wainriders, a confederation of Easterlings, and the Men of Khand. During the simultaneous assaults from the north and the south, Gondor came close to destruction, but the campaign nonetheless ended with the Wainraiders' defeat in T.A. 1944.

In the third millennium since the fall of the Dark Tower, the Dark Lord rose again, and his servants in Harad flocked to his abnner They threw down the monument to the capture of the Dark Lord in Umbar and again swore fealty to the Eye. The Haradrim were stirred up by emissaries of Sauron to attack Gondor again, and in T.A. 2885, they did so at the Crossings of Poros. However, they were defeated again, for Gondor had the aid of the horsemen of the north. The ferocity of the Rohirrim's princes took the Corsair warriors at unawares, and though the princes were slain, their wraiths are said to inhabit the mounds at the river Poros. In even more recent history, a dastardly raiding party from Gondor sailed to Umbar, and there burnt the greater part of their fleet and slew the Captain of the Havens. For this insult they will pay with blood.

The Southrons move to war once more, committed to take vengeance upon the accursed rabble of Gondor. Harondor they have already taken, and Umbar is theirs. Soon, Gondor will fall, and the fertile lands and booty of the West will belong to the Men of the South. The Dark Lord has promised them rich reward for their aid, and to battle they will go, in honour of their god-king. Their great hosts, scarlet-clad with red blades, painted faces and earrings of gold, march to war, with the bellowing of the mighty Mûmakil sounding as a trumpet about them. The Black Serpent upon Scarlet will fly across all the West, and all will pay fealty to the Kings of the Southlands!

The Men of Near Harad are allied with the nearby factions of the Morwaith, Half-trolls and Mordor. They are neutral with most from the far-off factions of the North and East, but are enemies with the Elvish factions and most of the good Mannish factions, especially their rivals, Gondor. They do not encourage war crimes (the killing of enemy civilians).

Ranks of Near Harad:

Inter-faction relations for Near Harad (NEAR_HARAD)

The Southrons' Sphere of Influence is centred around their homelands in Harnennor, the Southron Coasts, Umbar, the Gulf of Harad, and the realm of their enemies in Gondor. 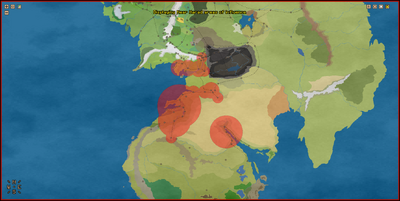 The armies of Near Harad, aside from the Corsairs and the Harnedhrim, do not invade lands to the north frequently. They are a force to be feared. Here are the places they invade.

Near Harad has frequent conflicts with its rival to the North. They can also conquer some of the lands to their south.

Corsairs: Dor-en-Ernil and Gondor (Lebennin and Pelargir only)

Near Harad has no allies.

Español
Community content is available under CC-BY-SA unless otherwise noted.