The Northlands straddle the border between Forodwaith and the rest of Middle-earth. It is similar to the ice plains biome in vanilla Minecraft, except Gundabad Orcs, wolves and Wargs spawn at night, along with ruined houses. The grass is brown here, instead of the blue-green of the vanilla variant. The precipitation in this biome is snow instead of rain, but, unlike Forodwaith, the player won't take frost damage.

Glflegolas did a regional spotlight on the Northlands (although then it was called the Tundra,) which may be found here. If you plan on visiting, make sure to check that out.

The Northern Forests makes up the less barren south of the Northlands, forming the border between the northern Tundra and the more temperate lands of Middle-earth. The area is densely forested with spruce, fir, and pine trees dominating the untouched Taiga woodland. These Northern coniferous woods are home to much more large animal species than the unhospitable northland plain. 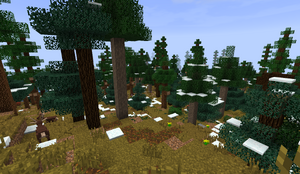 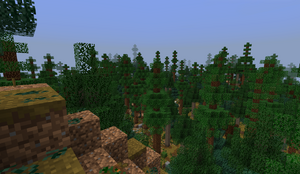 A far as the eye can see. 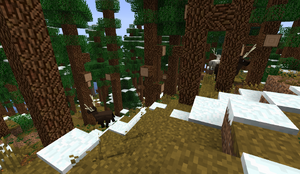 Elk strolling and munching.
Add a photo to this gallery

As the Northlands and Northern Forests contain differing fauna and geography, lists of variants for each is given below.

The Northern forests is, unsurprisingly, a forest biome and has the following variants:

Two structures spawn in this biome:

The only mobs that spawn here are the Orcs and Wargs of Gundabad, and they only show up at night.

Even though creatures of Gundabad spawn here, there are no Orc camps from which players can hire units.

Northlands can be conquered by Gundabad and Dúnedain of the North. The conquest rate is 1.0.

The normal Northlands are rather devoid of vegetation, due to their all enveloping blanket of snow, but the Great Northern Forest is, in itself, a forest of spruce, fir, and pine trees. 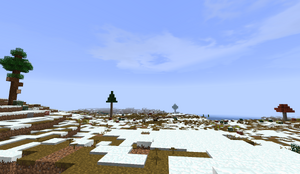 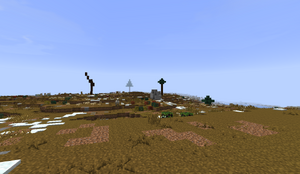 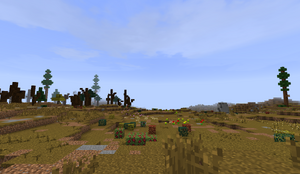 Some trees manage to bind together.
Add a photo to this gallery
Retrieved from "https://lotrminecraftmod.fandom.com/wiki/Northlands?oldid=622925"
Community content is available under CC-BY-SA unless otherwise noted.