Orc tents can be found in camps.

Orc camps are makeshift settlements of travelling Orcs and can be found in nearly every biome in which orcs spawn.

They normally contain a Table of Command in the centre and, if you are lucky, a forge tent and atop of the table either a trader or a chieftain. As they generally spawn in biomes where Orcs spawn, there might also be some other of the faction's Orcs around. Around the camp are skulls on fenceposts. The camps are illuminated by Orc torches. Also included is a small farm and up to four Orc tents around the center, some of which may be forge tents.

The following table shows some details, which are different for the various Orc camps:

The camps are made up of tents, which are made of wool and charred wood fences. Each tent contains a chest that may contain the faction's ingots, armour, weapons, bones, rotten flesh, maggoty bread, coal, sticks and other items. Before Public Beta 30, they were all black, in this update, brown and grey tents were added. The tents also contain a normal and a faction-specific crafting table.

Sometimes one or more of these ordinary tents will be replaced by a forge tent, that is made of the factions bricks (or cobblestone). Instead of a chest, they always contain an orc forge that can be used by all players, as the usage does not depend of alignment.

Orc camps also contain a small wheat farm with eight pieces of fully grown wheat. Mordor camps, however, have Morgul-shroom farms with eight Morgul-shrooms, instead of the wheat. Since Public Beta 31, a scarecrow is also included, even in Mordor, where no birds spawn at all.

Since Public Beta 30, there is only a chance for each camp to have a trader or a chieftain, before it was nearly guaranteed. Also, the camp now contains an invisible spawner for ordinary orcs and warriors, before the update, it was just random orcs wandering in.

If your alignment with the respective faction is appropriate, then you'll be able to trade with the trader or hire some units from the chieftain, if you are lucky and they are found in the camp. If your alignment is too low, go and get some quests or slay some of their enemies. 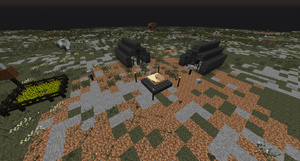 An Angmar camp with two forge tents and no ordinary tents. 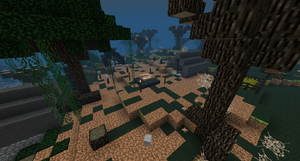 A Dol Guldur camp hidden in the remains of the woods. 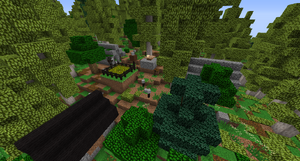 A typical Gundabad camp in Eriador hidden in an aspen forest. 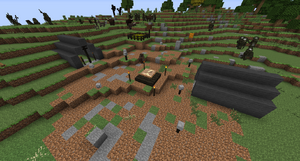 An Isengard camp in the highlands with an Uruk trader in the center and some Uruks visiting. 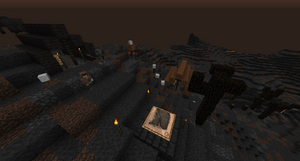 A typical Mordor camp with Morgul-shroom farm, two tents, a trader and a Mordor orc.
Add a photo to this gallery