The Lord of the Rings Minecraft Mod Wiki
Register
Don't have an account?
Sign In
Advertisement
in: Structures, Mordor, Dol Guldur,
and 7 more

Edit
watch 04:03
Wiki Targeted (Games)
Do you like this video?
Play Sound

You may also look for The Pits, the entrance to Utumno.

Pits are structures in which reside some spiders or wargs and a couple of Orcs. They can be found in some of the Orc-inhabited regions of Middle-earth.

They come in the following variations:

Both, warg and spider pits resemble each other in structure and appearance: The top of the pit is encircled by a charred wood fence. Before the Update 35 redesign, a fence gate allowed the player to pass through, with a ladder coming from the ground up to it for accesibilty.

The redesign now provides two entrances: A portcullis at the left to decend into the pit itself, which is still below ground level, and stairs at the right to get up onto the rim of the pit, which is slightly above ground level.

The rim is accessed via the stairs and forms a circle around the pit itself. The outside is secured by brick walls and stairs, the inside by a fence. It provides a view down upon the animals or onto the surroundings of the structure. It is illuminated by Orc torches on fence posts and has spikes on the outside. It also provides access to a small staff room.

The staff room is accessed via the rim and has two beds in it. A rugged carpet provides some comfort. A chest there has some minor loot. A normal and a faction-specific crafting table offer some workspace, orcish food and drink some refreshments. The windows are barred by steel bars.

From the portcullis, a patrially roofed, curved gangway slowly decends to the bottom level of the pit. A faction-specific gate there hinders the animals to run up the gangway.

The inside has two small, cage-like rooms around the big courtyard. It is decorated with faction-specific banners and illuminated by Orc torches

One pit will generally hold 3-6 spiders of varying sizes (the Mordor spider keeper probably will be riding one), or 2-6 wargs of various colours. There may be even a few Orcs of the respective faction.

Players with at least +250 Mordor alignment may hire units from the spider keeper. Other pits won't contain any captains.

It is suggested for those players who have a negative alignment with the respective faction, to stay away from these pits because they probably won't leave alive.

For positive aligned players, it is possible to tame and ride one of the animals found here. You don't need a saddle for spiders, but for wargs, just try several times to mount it, until it accepts you.

The following gallery shows the different types of the actual design. 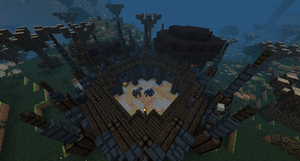 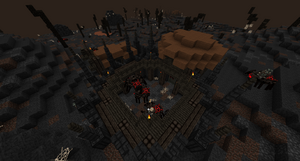 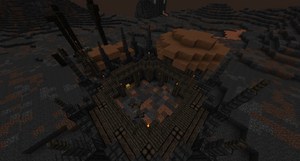 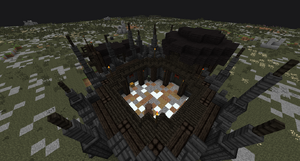 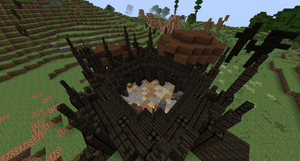 The following gallery shows the different types of the pre-Update 35 design. 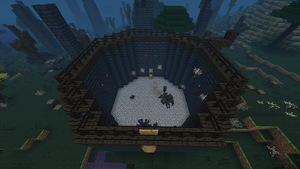 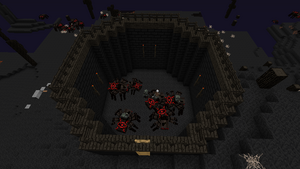 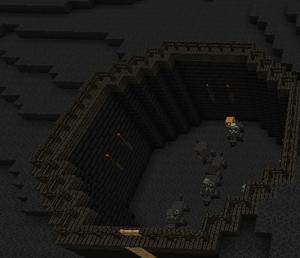 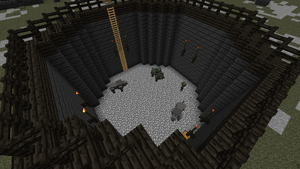 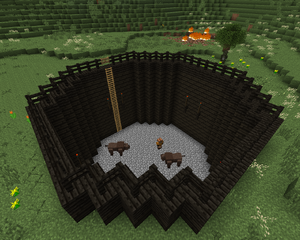