The Lord of the Rings Minecraft Mod Wiki
Register
Don't have an account?
Sign In
Advertisement
in: Renewed feature, Blocks, Items,
and 4 more

The plate is a type of block (and associated item) that can be found in a wide variety of structures, ranging from the Hobbit holes of the Shire, to the mead halls of Rohan, and the taverns of Dunland.

You can also make plates yourself with two clay balls or two logs in a row to craft clay plates and wooden plates respectively. Note that in the renewed version only, the wooden plate recipe yields eight plates, and they can also be crafted from log slabs (to yield four plates).

Once the plate has been placed on a block you can right-click it with a food item to place that item on the plate. You can stack up to 64 food items of the same food type on a single plate. Cakes and soups cannot be stacked on plates.

Plates, like pebbles, can be skimmed on water for fun. They rotate when thrown. 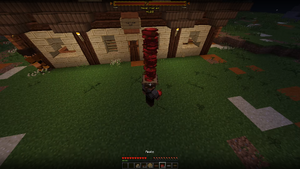 You can also wear plates on the head like a hat, and the plate will show food you are holding in your hand on your head, as shown to the left.

This feature is present in: Renewed only.

In Renewed, some food items have special, 3D models when placed on a plate. These models include chicken (raw and cooked), bread, pumpkin pies, and the various soup and stew bowls.

You can use a resource pack to add special models for more items, or modify or remove the existing ones. This is done by editing the file assets/lotr/models/item/plate_food/config.json, which contains the entries that link a particular item ID to a particular model file.

Plates can also be thrown, causing minor damage to any mob they hit, and breaking random glass or glowstone blocks that they fly through in a 5x5 corridor. Hobbits can also throw plates at you. You can auto-shoot plates by dispensers.

The achievement "Kitchen Brawler" is awarded for killing a Middle-earth NPC upon which damage has been inflicted only by thrown plates. 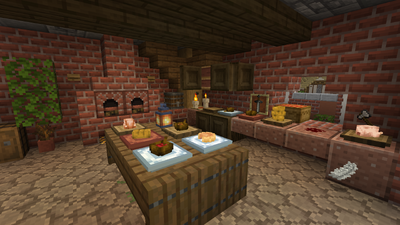