The Lord of the Rings Minecraft Mod Wiki
Register
Don't have an account?
Sign In
Advertisement
in: Renewed feature, Items, Gameplay,
and 3 more

Edit
This feature is present in: Renewed, Legacy.

Pouches are containers that are used to store other items, essentially expanding the player's inventory. Pouches come in three different sizes, which are small, medium, and large, holding 9, 18, and 27 inventory spaces respectively, and in various colours. Pouches are unable to hold other pouches, but can contain other storage containers like chests and furnaces.

When you find your first pouch, you earn the achievement "Bigger on the Inside".

Pouches can be picked up as an uncommon drop from most NPCs when they are killed by the player, or found rarely in chests in most structures. They can also rarely be obtained as a reward for completing a mini-quest.

When the player first spawns in Middle-earth, they will be visited by the Grey Wanderer and given three small pouches, as part of his quest.

To open a pouch, just hold it in your hand and right-click. The pouch inventory will show up in the same way as when using a chest. The icon in your inventory changes to an open pouch. That way, you know which content is currently displayed.

If you've got coins in your pouch, and you have the feature enabled, the total worth of all the coins inside the pouch will be displayed beside it.

When you pick up an item, it will be auto-sorted into one of your pouches, as long as there is already an unfinished stack of this item somewhere in one of them (if all stacks are full, the item will go into your inventory as usual). In renewed, when a pouch picks up an item in this way, it will display a tooltip to make it easier to spot which pouch the item was sorted into.

Opening a container (e.g. chest) while holding a pouch will open a chest-pouch interface to allow easier transfer of items between them. Pressing shift and right-clicking moves the items from the inventory into the container and when doing the same with items in the container they go into the pouch.

Also, to the upper-right of the player's inventory there is a small icon that, when pressed, will restock items in the inventory into pouches which contain matching items.

In renewed, pouches have a useful contents list in their tooltip (similar to the Box Shulker Box in vanilla) as shown below. 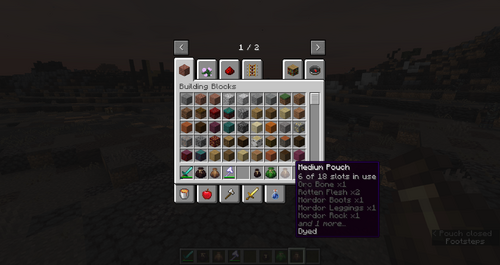 Naming your pouch is useful for quick recognition, for example: 'Food' or 'Weapons'. To name a pouch, right-click with it to open its GUI. Then right click into the name field above its contents and enter the desired name. To return to the default name, just clear it. When you hover over the pouch in the inventory, the tooltips will now show the name.

Pouches can be combined on a vanilla crafting table or the crafting grid of your inventory to expand their size. A small pouch and a small pouch create a medium pouch, and a small pouch and a medium pouch will create a large pouch (see example). When you combine pouches, they will lose the name of the previous owner(s) and their name(s) as well. They will hold the combined contents of the pouches you used. In renewed, this can also be done on faction crafting tables.

Pouches can be dyed a range of colours. To do this, you simply combine a pouch with 1-8 pieces of any dye, with the more dye added, the more saturated the colour becomes. In Legacy, this cannot be done on faction crafting tables, however it can be in renewed. If you want to undye your pouches, put them into a cauldron filled with water.

Any dyed or undyed pouch can be changed to a faction-specific colour, by putting it on the respective crafting table without any dye. It will then be the same colour as the pouches the respective NPCs drop after mini-quests or when slain. In renewed, these pouches will also have a tooltip saying something like Dyed in the colours of Mordor or similar to represent this.

Pouches were first added to the mod in Public Beta 8. They had fewer slots than they do now. A small pouch had 3 slots, a medium 6, and a large 9.

A chest opened while holding a medium pouch.