The Lord of the Rings Minecraft Mod Wiki
Register
Don't have an account?
Sign In
Advertisement
in: Renewed feature, Items, Plants,
and 4 more
English

Edit
watch 02:58
No Man's Sky Update - The Loop
Do you like this video?
Play Sound
This feature is present in: Renewed, Legacy.

Reeds are plants that grow in wetlands, fens and along the banks of rivers and lakes in many biomes and are especially abundant in watery biomes such as rivers and swamps.

These plants grow much like sugar cane, however only in water. When you place reeds on the surface of river or lake, it will instantly grow down to the bottom. You can't break it below the water surface, only above. When you break it, you'll receive as many pieces as are above the water. After a while it will grow higher, just like sugar cane. That way, you are able to farm it. Reeds generate both as fresh reeds and more rarely as the dried variant.

In the renewed version, reeds can only be between 1 and 3 blocks tall, and can grow either on dirt, grass or quagmire adjacent to water, or up to two blocks deep in the water. They have a different texture for each growth stage (as well as for being submerged) and can be grown with bone meal.

When placed in a furnace or Hobbit oven (no other type of forge works), one receives a dried variant, which can then be used for crafting.

Blowguns can be crafted using one stick and two fresh reeds. Three fresh reeds can be used to craft three pieces paper. In the renewed version, this yields two pieces of paper. They can also be crafted into storage bales by filling a crafting table with fresh reeds.

After drying the reeds in a furnace, they can be crafted into a reed basket, or into reed thatch blocks, using the 2x2 crafting grid or a vanilla crafting table. These blocks, in turn, can then be used as building material, or crafted into stairs, slabs and bars (as well as wicker fences and gates in renewed) on a standard crafting table as shown below: 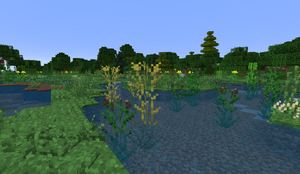 Live and dried reeds in the Gladden Fields - texture from Public Beta 28.1 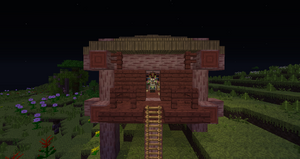 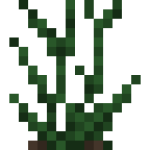 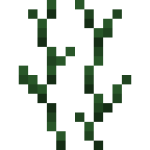 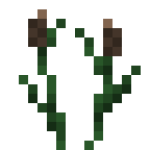