The First Age Submod is an edited version of the Lord of the Rings Mod* developed by Valiec and the Eras of Arda team. You can join our discord here to get the latest developments:

You can find past mod downloads here.

The First Age submod uses an edited map that adds Beleriand to the map, and removes the rest of Middle-earth. 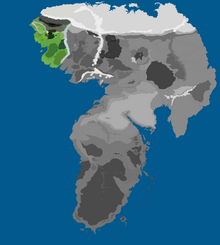 We have chosen to remove the rest of Middle-earth and replace it with ocean to keep the gameplay focused on Beleriand.

The First Age submod adds many new factions to the mod. Some of these factions are brand-new, custom coded in - and some of them are factions from the LOTRmod that have been renamed and repurposed. You can play as an elf of Doriath, a man from Dor-lómin, or an orc of Angband.

Retrieved from "https://lotrminecraftmod.fandom.com/wiki/Resource_Packs/The_First_Age_Submod?oldid=609028"
Community content is available under CC-BY-SA unless otherwise noted.