The Lord of the Rings Minecraft Mod Wiki
Register
Don't have an account?
Sign In
Advertisement
in: Rhudaur, Angmar, Evil,
and 6 more

Rhudaur Hillman villages are small groups of houses, that spawn in Angmar and surrounding biomes. They are the main settlements and homes of the Hillmen of Rhudaur.

The village is made up of several wooden structures which include:

Sometimes, a lone house will generate. Rarely, a village may generate with zero or two chieftain houses, though most villages will contain one.

The structure is constructed out of spruce wood blocks, planks, stairs, and slabs, giving it a cabin-like look. It has two open windows, one on either side, both of which are one block in size. Two torches hang above the entrance to the house. The gable bears a resemblance to the bowsprit of a ship.

The interior of the house consists of only one long and narrow room, illuminated with four regular torches. Patches of thatch cover the black stained clay floor, and the only decorations to be found are two skulls flanking a banner of the Rhudaur Hillmen on the wall.

At the end of the room is a straw bed along with a regular crafting table and a small chest. The chest can contain a variety of items, including food, Orc steel ingots, iron ingots, coal, string, bones, arrows, mugs, worn out equipment, and worn out armour.

The Rhudaur Hillman chieftain house will always be part of a village, although rarely it's missing, or there are two of them. Inside each house resides a chieftain from which the player can hire troops. This building is extremely vulnerable to fire given that it is made almost entirely out of wood.

The chieftain house looks significantly larger and more elaborate than regular houses, and has a very grand and steep roof that resembles Slavic architecture. The gable, again, looks like the bowsprit of a ship. Spruce wood and its variant blocks make up the walls, ceiling and the roof, and regular torches are used for lighting.

The most distinguishing feature of the chieftain houses are their entrances, which are decorated with two skulls and a banner of Angmar. They have got four windows (instead of two) and are divided into two sections as opposed to consisting of a single room like their regular counterparts.

Three more banners and two more skulls furnish the interior of the house, and the flooring is black stained clay covered with patches of thatch. A small fireplace surrounded by cobblestone can be found in the middle of the room, embedded into the floor, which caused some problems in one version of this house.

At the back of the room is a straw bed, a regular crafting table, an Angmar crafting table, a furnace, and a small chest. The chest contains the usual loot items, such as food, ingots, string, arrows, worn equipment, and worn armour.

One version of the house contained a small bug and completely burned down. This was fixed in Public Beta 27.1. 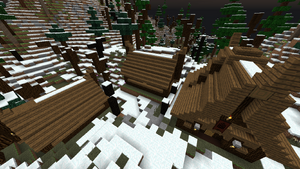 A nice cozy village in the snow. 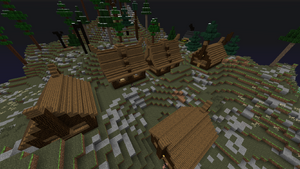 A village with two chieftain houses. 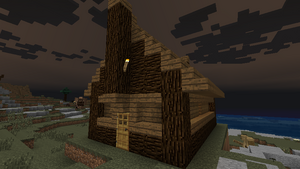 A Hillman of Rhudaur house. 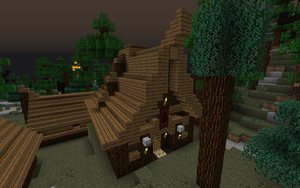 A Hillman of Rhudaur chieftain house.
Community content is available under CC-BY-SA unless otherwise noted.
Advertisement