The Lord of the Rings Minecraft Mod Wiki
Register
Don't have an account?
Sign In
Advertisement
in: Gundabad, Structures, Dwarves,
and 5 more
English

The Ruined Dwarven tower is the ruined equivalent of Dwarven towers. It has, like every Dwarven ruin, cracked bricks here and there, but also has a chance of the floor being composed of charred wood and filled with holes.

There are two variations of this structure. The first is just a ruined Dwarven tower, there's nothing too special about this, and it is completely deserted.

The second is a "taken" Dwarven tower that was presumably occupied by Orcs. The easiest way to distinguish this from the normal variant is the three Gundabad banners that hang on the walls above the entrance in a taken tower, two more on the top, and the Orc gate that marks the entrance, instead of a Dwarven one.

The interior of the Ruined Dwarven Towers are identical to the standard Dwarven tower, except made of cracked Dwarven bricks, and filled with holes in the walls and floors, so travellers should mind their step. In the normal variant can be found forges, crafting tables and chests with Dwarven items.

The taken tower variant holds Gundabad items and utilities (forges and crafting tables) in place of Dwarven items, and a chieftain will also spawn inside. Besides the chieftain, the tower is unoccupied, though other Orcs and Wargs may spawn through natural causes. 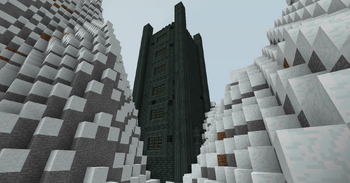 A ruined tower in the Misty Mountains. 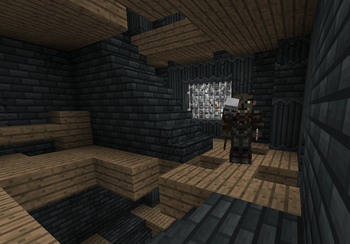 Mind your step, when speaking to the chieftain.
中文
Community content is available under CC-BY-SA unless otherwise noted.
Advertisement