The Lord of the Rings Minecraft Mod Wiki
Register
Don't have an account?
Sign In
Advertisement
in: Structures, Elves, Ruins,
and 3 more

Ruined Wood-elven towers are rare structures that spawn in Mirkwood corrupted. They were once lively normal Wood-elven towers, but now are nothing more than forgotten memories of the greatness of Greenwood.

About halfway up the tower, there are large, open doors facing each direction. These doors are often level with the canopy. These towers also have an underground level with a hole leading to a spider dungeon. The dungeons below the towers can contain very valuable loot.

Spider dungeons are areas that spawn underneath the towers, resembling a ruined version of the dungeons in normal Wood-elven towers. They used to contain a single Mirkwood spider spawner in the center, and each side of the room has iron bars and cobwebs, now they only contain a small amount of spiders that won't respawn (like the spiders and wargs in pits).

On the far wall are two chests, containing high-tier loot, most commonly iron and bronze equipment. Gold, silver, leather equipment, elf bones, skulls, and leather hats are also fairly common. The dungeon is accessed via a hole in the bottom floor of the tower. However, there are no ladders so you will have to find or make a way out of the dungeon. 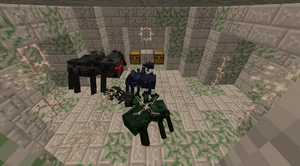 A spider dungeon, viewed with a potion of night vision, creepy.
Community content is available under CC-BY-SA unless otherwise noted.
Advertisement