The Lord of the Rings Minecraft Mod Wiki
Register
Don't have an account?
Sign In
in: Farming, Structures, Environment

Edit
watch 02:23
Wiki Targeted (Games)
Do you like this video?
Play Sound

A scarecrow is a feature that was added in Public Beta 30, along with several other improvements regarding birds. They are not an item that may be found or crafted, but are built by the player out of blocks. These structures are rather open to the player, and can get quite creative. Scarecrows spawn in structures where crops grow.

A functional scarecrow can be manufactured with the following items in this order:

Important: All three parts have to be in a vertical row. You can attach arms or whatever decorations you want to.

This contraption can be used as a companion to follow the yellow brick road (see here), or as a farmer's best friend. Scarecrows will frighten away any birds attempting to take crops when present within a distance of 16 blocks horizontally and 8 blocks vertically from said bird, measured from the head of the scarecrow. This way one scarecrow protects a maximum square of 33x33 blocks, exactly the size of a silver block banner protection area. 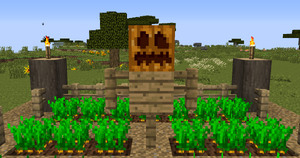 This guy is looking out for its crops.

This scarecrow is ready to help!

Not very scary, the lollypop scarecrow. It poses here, to demonstrate the maximum body height. 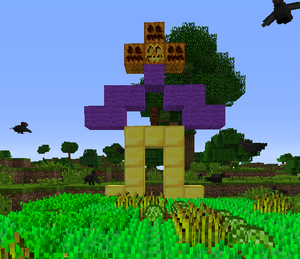 Watch out for the farm golem! This really works. The functional scarecrow is only the jack-o-lantern+wool+air+fence post. The rest is pure decoration and could be obmitted

This caterpillar won't eat your crops, but protect them. 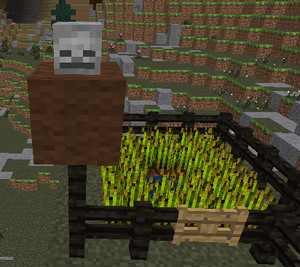 Even the Orcs of Angmar use scarecrows in their camps. 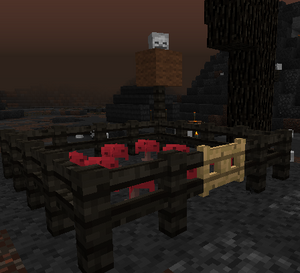 Pretty useless: Generated scarecrow in a Mordor camp, as there are no birds in Mordor.
Community content is available under CC-BY-SA unless otherwise noted.