With the Public Beta 20 update came the Shire Reckoning calendar, which is what the Hobbits of the Shire use to keep track of the date. It was invented by J.R.R. Tolkien himself. If you are interested in other calendar systems, please visit Tolkien Gateway for that.

In the Mod[edit | edit source]

The current date is displayed on-screen every morning when the sun rises, and is also written at the bottom of the left page in the player's red book. The date format consists of the day of the week, the date, the month, and the year in Shire Reckoning.

The date can be retrieved or altered by using the command:

With <date> being the number of days passed since the starting date.

In the renewed version, the command is /lotr_date

New worlds created with the mod always start at the 22nd of Halimath (September) 1401 S.R., Mersday (Thursday), which is the date of the eleventy-first birthday of Bilbo Baggins.

Currently, the Shire Reckoning has no impact on gameplay; it is a purely immersive feature. Once storyline quests are added, the date will likely play a larger role.

How the calendar works[edit | edit source]

The Shire calendar contains 365 days total (except on leap years, where there are 366), which are divided in 30 days per month for twelve months and five holidays. It follows the lunar cycle.

According to the lore, the Shire Reckoning calendar begins with the crossing of the Brandywine by Marcho and Blanco of the Fallohides in the year 1601 T.A. (Third Age). They started a new counting of time taking the old King's Reckoning and modifying it to fit their customs.

Days of the Week[edit | edit source]

The days of the Shire week parallel our own Gregorian calendar. Below is a list of all the names of the days of the week and their English counterpart.

The Shire calendar is divided into twelve months with 30 days in each month. Note that in the East-farthing and Bree, some names are slightly altered (given in brackets).

Notice that a few days seem to be missing? Read the section below.

Typically, there are five holidays in the Shire calendar, and none are part of a specific month. Midyear's Day  is also not attached to a day of the week.

Every four years (except for years divisible by 100) there is a leap year that consists of 366 days rather than 365. This added day is called Overlithe, and takes place on the day between Midyear's Day and 2 Lithe. Like Midyear's Day, Overlithe is not attached to a specific month or day of the week. The first leap year to naturally take place in the game is in the year S.R. 1404, or T.A. 3004.

Since Public Beta 23, the Middle-earth time is independent of vanilla world time, and can be accessed via the command: 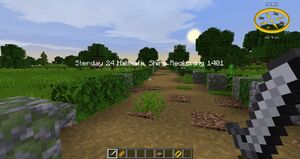 The date display in the renewed version.
Add a photo to this gallery
Retrieved from "https://lotrminecraftmod.fandom.com/wiki/Shire_Reckoning?oldid=634237"
Community content is available under CC-BY-SA unless otherwise noted.