The Southron Fortress is a large structure that spawns in both the major regions of Near Harad (fertile and desert) and contains a large amount of bonuses for those aligned with the Southrons.

A Southron fortress is made of Haradric brick and walls and has a date palm tree on the highest turret. Inside, there are a few food items, a barrel of araq, two armour stands, both a regular crafting table and a Haradric crafting table as well as a furnace and two baskets with some food, drink and everyday items. Underneath the stairs are another two baskets that have items more unique to the Southrons, generally equipment based.

Along the front outer wall is a series of Southron banners.

On the top floor of the fortress is a Southron warlord that you can hire Southron units from if your Near Harad alignment is high enough.

This structure was added in Public Beta 18 as "Near Harad Fortress" in a first Harad redesign. In Public Beta 32 it was renamed "Southron Fortress" as all Near Harad related content was renamed. Finally it was removed in Update 34 during a complete redesign of Near Harad. Fortunately the structure survived as a half-buried ruin which contains a lot of loot. 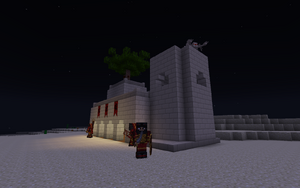 A Southron fortress at night. Note the scorpion on top of the tower. 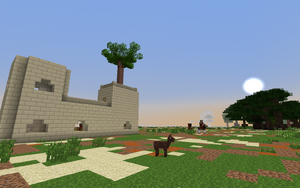 A Southron fortress in Near Harad fertile. 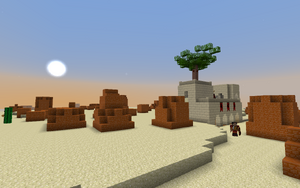 A fortress in the red boulders variant of Near Harad. 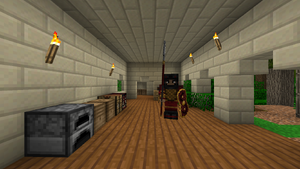 Ground floor of a Southron fortress. 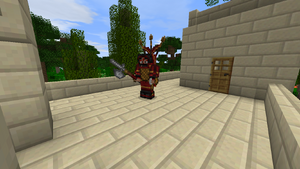 Top floor of a Southron fortress.
Add a photo to this gallery
Retrieved from "https://lotrminecraftmod.fandom.com/wiki/Southron_Fortress?oldid=598079"
Community content is available under CC-BY-SA unless otherwise noted.