The Lord of the Rings Minecraft Mod Wiki
Register
Don't have an account?
Sign In
Advertisement
in: Templates, Removed, Structures,
and 6 more

A Southron village with a tower.

The Southron village is a collection of several Southron structures that form a village. These villages can be found in the Near Harad fertile biome and usually contain many valuable items as the village has at least sixteen baskets and has a high chance of having one (or more) bazaars, which feature four traders each.

This structure, as a whole or in components, can be created using structure spawners in creative mode, but be warned - spawning in this structure can cause several seconds of lag due to its large size.

Each village has a village centre that contains a roofed well. On the roof of the well grows a date palm tree. Two enclosures for animals (sheep, boars, chickens, camels, etc.) and two small farm plots (for wheat, potatoes, carrots, etc.) surround the well.

From the village centre, straight streets 24 blocks in length branch off in each direction. Every street has its own colour in the middle and two houses on each side, making a total of 16 small houses.

In the corners of the village (furthest from the centre) are a selection of randomly chosen buildings from the following list; every combination is possible:

Nearly everything in the village is made of brick mixed with sandstone and stained clay.

Southron houses are the most abundant structure in a village and the only structures that have a certainty to be present in any one village. Sixteen of them always spawn, with two on each side of the four roads of the village.

They consist of a single room, which contains a furnace, a normal and a Haradric crafting table, and a basket with mostly food and drink.

A ladder leads to a porch on top, which is furnished with two beds. There are four hibiscus or flame of Harad flowers, one in each corner.

Southron large houses are owned by the richer members of the Southron society and are only found in the corners of the village.

They are made from bricks and hardened clay. On the ground floor, they contain various foods and drinks on a table, a barrel of araq or another alcoholic drink, two furnaces, and a basket with mostly food in it. On the top floor, there is a bedroom with two normal beds. A door leads to the balcony with either two flame of Harad or two hibiscus plants.

Southron towers are military structures. They are the biggest buildings in the village, and can only be found in the corners. They have a good chance to include complete armour sets and are thus good starting buildings for Southron players.

Since Public Beta 27 the towers are entered by Haradric gates, which are combined with some bronze bars.

The tower features three or four floors (including the ground floor) plus the roof. It has a spiral staircase in the middle to get up and down. Each floor has one random object on each side. The objects can be one of the following:

The tower is occupied by warriors and archers, one per floor. Towers do not house warlords; instead, these NPCs can be found in the fortresses which appear in both the fertile and desert regions of Near Harad.

The corners of the village can also comprise Southron bazaars. There are always four shops here, each housing one of the traders of Near Harad. It is possible to encounter two (or more) of the same type of trader in a single bazaar.

The shops themselves are constructed from date palm wood and wool (various colours). Each shop contains items in accordance with what its trader sells. These items (plants, ores, food, drinks, kebab stands, furnaces, and anvils) are worth looting, since they are easy to get.

This village was added in Public Beta 18 as "Near Harad Village" in a first Harad redesign. In Public Beta 32 it was renamed "Southron Village" as all Near Harad related content was renamed. Finally it was removed in Update 34 during a complete redesign of Near Harad. There are a lot of subfaction-specific Near Harad settlements now. 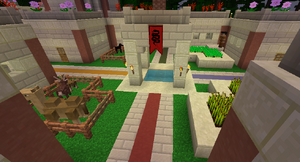 The village centre with well, farms and animals. 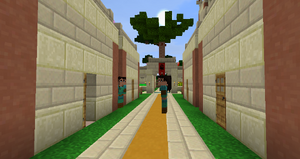 In the street, looking towards the centre. 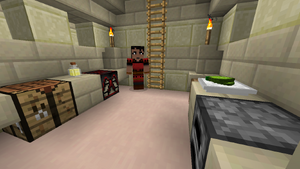 Inside a small house. 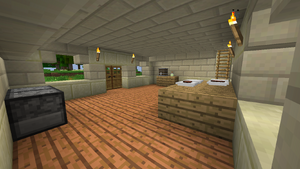 Inside a large house. 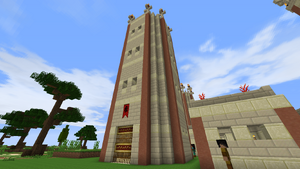 Southron tower, as part of the village. 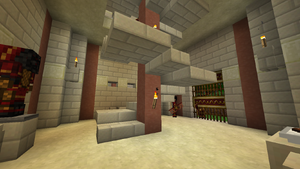 Inside the tower, ground floor. 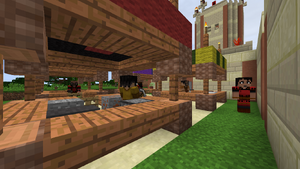 On a bazaar.
Community content is available under CC-BY-SA unless otherwise noted.
Advertisement