The Lord of the Rings Minecraft Mod Wiki
Register
Don't have an account?
Sign In
Advertisement
in: Structures, Ruins

You may also be looking for small stone ruins.

Stone ruins are typically tall, pillar shaped stone ruins that can be found throughout most regions of Middle-earth where once great civilizations thrived. They are the remnants of towers, fortresses, strongholds, houses of worship, and many more possible original structure types. As time and weather have had such an impact on them, it is difficult to recognize their original purpose.

Stone ruins mainly consist of deteriorated pillars with a variable width and height. They can be very small and appear to be just rubble, or very tall, up to 20 blocks. Scattered around the pillar you can find bricks, some of which stacked on top of each other. They are made out of stone brick or various materials crafted and used by the civilisation(s) that once ruled the lands in which the ruins are present. Cracked and mossy variants of the main brick type are also present in the structure. As well as the various faction specific types, the most common type is the vanilla stone brick ruin.

Apart from the construction materials, these structures contain nothing of value for the average mortal sapient, unless they happen to be Middle-earth archaeologists. 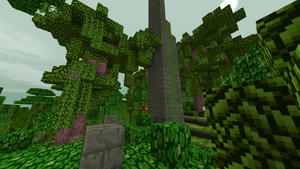 Stone ruin in Far Harad jungle made of Taurethrim bricks 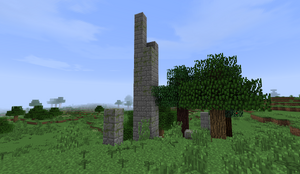 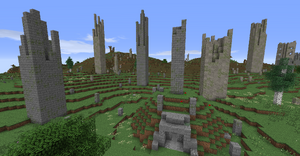 Several Arnor and stone brick ruins in the Barrow-downs 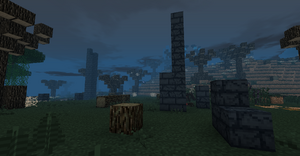 Some ruins in Dol Guldur 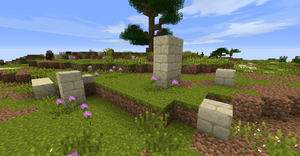 A ruin in Umbar

The table below provides information on which variants of stone ruins can be encountered in each biome, with a ratio indicating the relative occurrence in each biome (the higher the second number, the lower the chance of generation in a chunk; for reference Rohan watchtowers roughly have a chance of 1 in 400 to generate in any chunk). It also lists the possible range of widths (in blocks) of the central pillar. In many cases these are the same biomes where the small stone ruins can be found.

Note: some biomes have separate ruined structures not listed here (such as Gondor and Gondor Ruins). See Ruins for a list of other ruins. Also, sub-biomes use the same spawning as the main biome unless stated otherwise.