The Lord of the Rings Minecraft Mod Wiki
Register
Don't have an account?
Sign In
Advertisement
in: Items, Gameplay, Unit Hiring, Weapons

The Sword of Command is an item the player may use to control what their hired units target. It was added in Public Beta 16. As of Public Beta 29, it targets an area instead of a single mob.

The Sword of Command is crafted with an iron ingot, a bronze ingot, and a stick on a vanilla crafting table.

The player may use the Sword of Command by holding the sword, pointing at an area up to 64 blocks away, and right-clicking. This will cause all of the player's hired units to target the mobs in the area, that the sword points at unless the hired units are allied with it.

The player doesn't have to be within interacting range of the target, and they can use the sword even if there are hired units or allies between them and the target. However, the target must be within the hired units' attack range, or else they will not be able to pathfind to it and will simply do nothing.

To cancel the attack, the player must right-click on nothing in particular (no mobs) with the sword in hand.

The sword has unlimited uses (durability), but it cannot be used to block and provides no attack bonus without being enchanted. 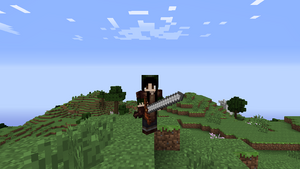 Player holding a Sword of Command.
Community content is available under CC-BY-SA unless otherwise noted.
Advertisement