The Lord of the Rings Minecraft Mod Wiki
Register
Don't have an account?
Sign In
Advertisement
in: Non-canon, Biomes, Half-trolls,
and 3 more

The cursed woods of Taur-i-Thorogrim

The cursed woods of Taur-i-Thorogrim

The forest of Taur-i-Thorogrim, or 'Forest of troll-men' in Sindarin, is a cursed forest on the borders of Perdorogwaith. It is a part of the larger Far Harad Forest, but it is under the control of the Half-trolls of Perdorogwaith and cursed by ancient atrocities. The region centres around the river Sereghir, which flows from the southernmost of the Great Lakes of Harad in the through the Far Harad Forest and into Perdorogwaith.

In the late Second Age, this region was the heartland of the Empire of Kimen Kâh, the last true kingdom of the Taurethrim. But that changed in SA 2161, when an army of Half-trolls crushed the armies of the Taurethrim in a terrible battle at the borders of the woods, and then besieged and razed Kimen Kâh itself. The Half-trolls slaughtered the entire population of the city, and the dead were so numerous that the river near which the city was built ran red with blood, for which reason it was named the Sereghir. This horrible massacre left the Taur-i-Thorogrim cursed, and the region has been under the rule of Half-troll tribes ever since.

Compared to the surrounding forest, which is green and full of life, the Taur-i-Thorogrim is a dying land. As with the Far Harad Forest, the biome is dominated by oak and acacia trees, but many of them are dead, and other vegetation is sparser. The grass is much greyer here than it is in the surrounding forest, and the sky is a similar shade of greyish-brown. Boulders, piles of waste, and skulls from the ancient massacre dot the forest. Taur-i-Thorogrim is constantly shrouded in a thick layer of fog.

This region is dominated by the Man-hating Half-trolls, who ensure that traders and Bandits alike stay away. Their warriors occasionally patrol the biome, and larger groups of them invade the region as well. The Taurethrim send out incidental expeditions to this forest, likely seeking to drive the Grey Demons that they hate so much from the ruins of one of their old kingdoms.

Upon entering this region, the player is granted the achievement "Forest of Demons".

Next to the standard, most common, variant, the following biome variants can be found here:

Apart from scattered ruins of what seem to have been Taurethrim constructs, there are no structures in this region. The Half-trolls passing through the forest have no need for permanent structures with Perdorogwaith nearby, and so they have built nothing here, not even camps.

As with every biome in Far Harad except Perdorogwaith, Taur-i-Thorogrim generates gemstones at a slightly higher rate than most biomes, akin to the rates at which they can be found in most mountain foothills, together with all of the usual ores.

Since the Half-trolls conquered the biome and it became cursed, Taur-i-Thorogrim has begun to lose its resemblance to the neighbouring Far Harad Forest. In terms of vegetation, it is very similar to a cross between Perdorogwaith and the Far Harad Forest, dominated by acacia trees and desert oaks, many of which are dead. Boulders or piles of waste blocks break up the forest fairly frequently. Ground vegetation includes wheat grass, thistles, and clovers. Giant Baobab trees can occasionally be found here as well. 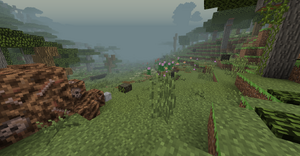 Piles of waste on the edge of a small clearing, likely the remnants of an ancient Taurethrim patrol. 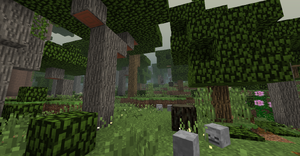 Some skulls scattered in a light forest. 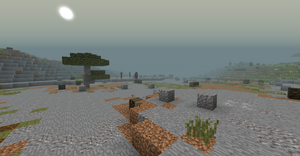 A desolate view: Some Half-trolls standing around in the wasteland during sunrise. 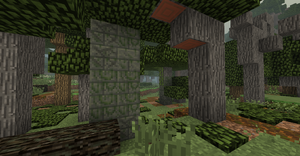 Some ancient Taurethrim ruins can still be found in the woods. 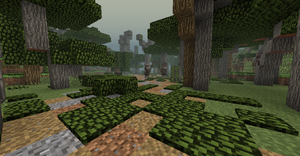 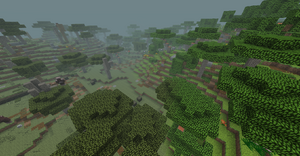 The fog disappears and the vegetation gets greener when you cross the border from Taur-i-Thorogrim (left) to the Far Harad forest (right).
Community content is available under CC-BY-SA unless otherwise noted.
Advertisement