The Lord of the Rings Minecraft Mod Wiki
Register
Don't have an account?
Sign In
Advertisement
in: Structures, Taurethrim, Harad,
and 4 more

Taurethrim Pyramids are large Taurethrim brick pyramids that spawn in the Jungles of Far Harad. The pyramid is a huge maze dungeon, made difficult by the fact that it is impossible to break through, as they are "under the protection of an ancient power".

All mazes are generated using an algorithm in the mod's code, so each pyramid has a different maze. Although, there are a few torches included, all the mazes are only dimly lit.

At the top of the pyramid, there is a staircase leading into a small room. Starting there, you enter the first maze of narrow corridors, six blocks in height, only one block wide, until a hole in the floor leads down to a larger maze section.

The ceilings of this larger maze are lower, only two blocks in height, but also one block wide. It too has a hole in the floor that leads to the next level.

This level is not a maze, just a large square of one corridor (5x4 blocks) that goes around the center staircase, which leads down to the fourth level.

This level has wider corridors, three blocks by three blocks, that is a lot easier due to its size, but has lots of Taurethrim dart traps - normally up to a full stack's worth or more. This level has a trickier design, albeit shorter. From this level, a small staircase leads down to the treasure room.

The player reaches a large open room full of lava with Taurethrim brick edging, and Taurethrim bricks dotted throughout the field of lava that has to be crossed by jumping from one stone to the other until the players reaches the center - no water or blocks can be placed because of banner protection. If you are not that good at hopping around like a rabbit (especially when lava makes you nervous), bring some kind of fire protection, to be able to swim the lava lake unharmed. Building bridges is not possible, as the whole structure is banner-protected.

At the center of that room, a raised island of Taurethrim bricks can be found, with 4 stone chests, and a Taurethrim banner on a gold block, with its self-protection turned false so it can be broken (thrown objects cannot break it but it can be punched). As of beta 26, Taurethrim pyramid wraiths will attack any player to survive the mazes and the lava lake upon attempting to open a chest. Each chest will spawn one Taurethrim Pyramid Wraith (for a total of 4 if you open all the chests). The Wraiths are immune to lava damage - even if you knock or push them into the lava lake they will not take damage and will attempt to come back to attack you.

The Taurethrim Pyramid has 4 Stone Chests in its final room, as well as a gold block that a Taurethrim Banner rests upon. The chests contain:

So far there are three known variants of the Taurethrim Pyramid: 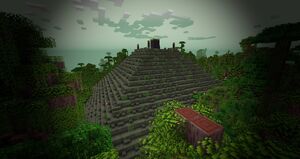 The first officially released screenshot of a Taurethrim pyramid. 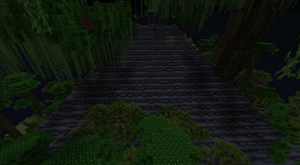 The exterior of your standard pyramid. 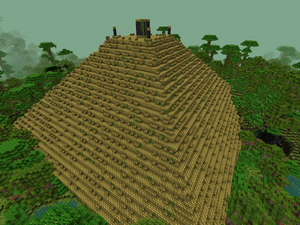 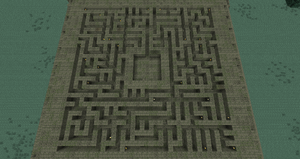 An aerial view of the first level of a stone pyramid. 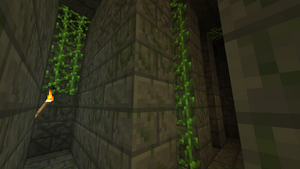 A section of the first level. 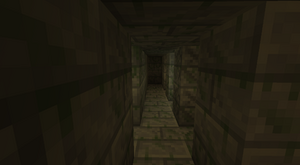 A section of the second level. 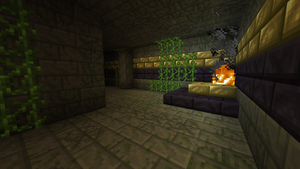 A section of the third level. 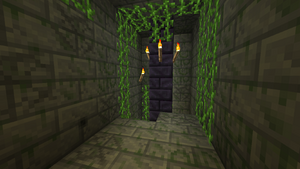 A section of the fourth level, stairs going down, notice the dart trap. 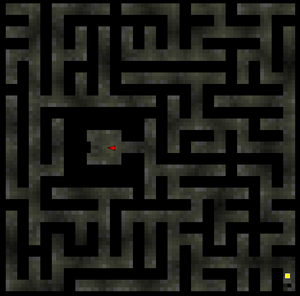 A floorplan of the fourth level. 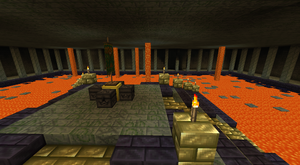 The center of the pyramid.
Community content is available under CC-BY-SA unless otherwise noted.
Advertisement