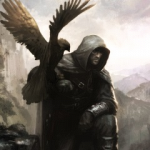 The worlds Tolkien and Mojang created are both incredibly inspiring. The world Mevans created does justice to both Tolkien and the creators of Minecraft. And as I like to reside (flee) in fantasy themed worlds and enjoy survival building ... I also do my thing on a number of LOTR Mod servers.

Activity on this Wikia

After I've had a rather productive period on both forums and wiki pages, I was surprisingly promoted to become one of the Content Moderators of this Wikia on January 28th 2016.
You may notice I'm most active on wiki pages for biomes and related subjects, and I tend to step in trying to help out in any forum. Pages I keep a close eye on are the Servers page and any Biomes page. I also have a preoccupation with biomes and the subjects related to my own suggestions on rpg elements, see the list below.
In April 2016 the Admins requested me and colleagues WarPig and Ithilion to take the lead in defining and implementing a new procedure to deal with suggestions. We have formed a small team discussion group on FaceBook to organise this. On behalf of the Admins Grievous joins us there, and on behalf of the mod team two Moderators also joined in. We have taken steps to gradually improve the procedure and the first steps are communicated in this announcement thread.
In March 2019 I decided to end the drag of moderating the Suggestions forum with this announcement and have regained full focus on content moderation and editing.

My 'signature' colour (originally a background and border colour) is this   dark green  , hex code #669900.

I tend to lose myself in my building efforts, which are predominantly made in survival mode. Here's a list of illustrative builds, most of them made on LOTR Mod servers:

So, I have a preoccupation with large builds ... and battlements. But I've also been focussing on more common stuff like smithies, stables and pens. Pretty enjoyable too with this fantastic mod! :)

I explained that in this thread for my character on the First Age server we had with the Eras of Arda team quite effectively: Gameplay intentions and expectations

I am especially interested in dark fantasy themed worlds like that of Tolkien and have a weak spot for the world created for the Civilization IV mod 'Fall from Heaven II'. This is why I introduced that world and it's lore in DFR and I am still working on finding the best way to create the DFR world 'Vesperus', which is based on that theme and the rich FfHII lore. Also I'd like to some day recreate the FfHII world 'Erebus'. The way Mevans modded Middle Earth is incredibly fit-for-purpose and inspiring, and I derive ideas from his work for implementation in the worlds for DFR.

Due to a bad medical condition I had to postpone my work as head-admin and world creator in the past year for two longer periods. In the first period, in early 2015, I restarted playing the LOTR Mod (played it from Beta 8 onward), as I found it to be very inspiring for my world creation efforts. I joined HubToo on his newly created server back then, and couldn't resist staying and playing longer than needed for my recovery ... bad Alte. The second period started in september and will hopefully end soon ... so I'll be able to recommence world creation and server management & plugin customization again ... which will imply I will spend less time here though.

Moving on to 2019, the ideas of the above past (that was 2015) still live in my tired body. After several attempts to go sub-modding with the Eras of Arda team, working on FA and SA derivates of the LOTRmod, I now found a new love in Chronicles of Elyria (CoE) where I spend much of my gaming time. Besides that, CoE offered the opportunity to launch a LOTRmodded server based on the concepts I feel important for long term, pleasant multiplayer gameplay with the LOTRmod. See below for more info on CoE and my own LOTRmodded server.

The PvP Mode mod is a serverside utility mod aimed to improve the experience regarding PvP on multiplayer servers in various ways. It was initiated and in concept designed by me, motivated by my experiences on various servers and my views as expressed here. The purpose of the mod has shifted from supporting consented PvP, if desired, to a broad variety of useful features to help server staff and players improve their PvP experience.

Lembas is a serverside mod that is being developed by the same team that also took on the development of the PvP Mode mod. Its purpose and scope are not fuly disclosed yet, but the mod basically aims to offer an alternative to ForgeEssentials and a serverside mod that was developed for the Eras of Arda servers: SuffixForge, which specifically supports a number of features aimed to improve immersion in roleplay.

This serverside mod was created for the Eras of Arda servers by User:Timgodreuil based on directions from the former management team, a.o. me. It is no longer developed and maintained, but it is functional and in use on Ilu Ambar, providing an effective set of features aimed to enhance the immersive roleplay experience. Noteworthy are the local /rp chat, chat prefixes and a number of handy 'Essentials' for players and staff.

This concerns one of my favorite aspects in Minecraft server gameplay: Roleplay character development & RPG features. I enjoy developing my character through roleplay interaction with others and through levelling, both vertically and horizontally. This made me combine MCMMO and Heroes on our DFR servers and design a complex system for races, classes and trades/professions, which wasn't as strict class based as most classical MMORPG's. I would very much like the LOTR Mod to include some 'Advanced' RPG System that provides similar player fun. I played with lots of ideas on how to combine plugins and mods to achieve this. Finally, after I saw this Blogpost by Mevans, I figured that announcement would offer the incentive to add some of my ideas to the mod ... so I hope. Since then, I pondered out the system I presented in the suggestions forums in late 2015 and throughout 2016 as an additional feature suggestion for this mod.

The above and the sub-sections below has crystallised out some years ago. With present insight I expect not much of what I proposed here regarding that 'Advanced RPG system' will even make it into the mod. So be it, we move on.

Main ingredients are comprised in these 4, all community-endorsed, suggestion threads:

These 4 main features can all be added independently, but there is much synergy in the combination of them. It seems best not to code them without taking into account one or more of the others.

Other relevant suggestions made by others in relation to the above are (a.o.):

Note that most of these 'related suggestions' have been included (either entirely or in a derived form) in the 3 first main suggestions threads I produced on this subject.

I hope the conceptual code designer in Mevans is or will become weary of copying code to produce new features based on existing ones, and is or will get eager to take on a new coding challenge ... preferrably this one.

As any concrete feedback on the 'advanced RPG' proposals is still pending, and I have been playing on TOS for a while, where enchanting is disabled, I pondered this proposal on a much simpler system: Vigour. This basically defines one 'trait' a player can improve. The vigour level is simply the same as the vanilla experience orb level. The levelling buff is a small percentage of damage decrease from melee combat and environmental impact, proportional to the vigour level of the player. The vigour of a player can be explained by assuming it represents a combination of the traits used in my abovementioned, more advanced, and complex, proposal.

Note that this simple system contributes significantly to the immersiveness of experiencing a 'knock-out' (minecraft death, in my interpretation). Reason is that when you have tens of vigour levels and get a knockout and lose all but 5 of them (as is the case on TOS), you, as a player, experience the fact that you have been wounded severely and need to recover to regain the vigour level you had before the knock-out.

In addition to the above, which was noted a few years ago, I can state here that it may be interesting to introduce the Vigour system described here as a module feature in the PvP Mode mod at some point.

Other suggestions to improve the LOTR Mod

Here's an overview of my most relevant suggestions to improve the LOTR Mod. Most are just aimed at improving the roleplay survival building experience. My own suggestion threads:

Suggestions I made in other threads / to improve on other people's suggestions:

I posted more suggestions and crazy thoughts in many suggestion threads, but these are the most significant ones I think.

Suggestions to improve this wiki

For now, only this page and related posts:

Note that I quit moderating the Suggestions forum in early 2019 as explained in this thread.

I tend to play only very few other games. Noteworthy ones:

For anyone who is interested in this game and has any questions, you can contact me via Discord or hop on the CoE forums or Discord server. I warmly recommend any mature roleplay focussed player to join us in the Duchy of Anor on the planned EU based server.

Support Mevans and the mods development

Check the home page of this wiki, section 'Donations'.

Retrieved from "https://lotrminecraftmod.fandom.com/wiki/User:AlteOgre?oldid=609953"
Community content is available under CC-BY-SA unless otherwise noted.