User:Faenor of the Silver Laurel 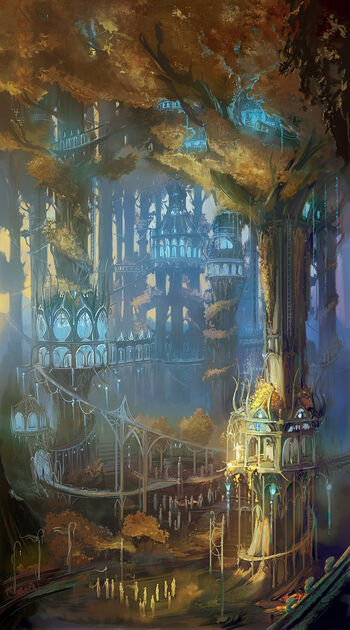 Faenor Celebrî is a Sindarin Elda, formerly of the realm of Doriath, that has managed to survive into the Third Age. Present for most of the major conflicts of the Ages, he has performed no especially great feat worthy of mention in the annals of Middle-earth, and he was neither known to the Wise nor recognized for any of his works. All that is known is that he died a shameful death.

A Sindarin elf of Doriath, a survivor of the ancient Journey. After the battles of Beleriand and the sack of Doriath he was also known as Ardhel, a spiteful name among his own kin that caused him to depart over the Hithaeglir for Lórien.

A Sinda with greyed hair and grey eyes. When he was young his hair had been brown, but the wars in Beleriand had stressed him beyond belief, and so he greyed before his time. He is the only known Elf to do so.

Generally, he had worn brown robes before the fall of Doriath: afterward, he only ever wore black, with silver arms. A silver laurel wreath on a black field was his emblem: a symbol of victory without hope. He put these aside for a time when he served Gil-galad during the War of the Last Alliance, but after Gil-galad’s death - if he indeed survived that war - he would have taken them up again.

Though he was reputed to have recovered Fingolfin’s sword, Ringil, he never actually did so: his own sword was indeed of similar make, but was a Ñoldorin weapon that had been brought by Fingon’s train out of Valinor, and was named Rilya. It was long and straight, a hand-and-a-half sword with a handle of polished black hardwood, waisted and wrapped with silver wire. The hilt was set with jet pearl, and the spine and edges of the sword were of adamant; and it glittered in the light like dew after dawn.

Faenor was known to have also used a spear: it had no name, but it was about two metres in height, with a long point of steel edged with silver, and the shaft was of hard black wood. Both steel and haft were covered in designs after the manner of vines, and the head was fashioned in the shape of twisting thorns, long and sharp. It was apparently shattered during the War of the Elves and Sauron.

Faenor used numerous bows throughout his life, after the manner of many Teleri, but he was generally seen to prefer longbows of Sindarin and later Nandorin make, of nearly two hundred pounds’ draw weight. There was at least one instance during the War of the Elves and Sauron when he felled an armoured troll with one arrow thanks to the heavy weight.

Faenor’s armour was simple: unadorned by device or decoration, it consisted of a silver cuirass over a bright mail shirt, which ran down and split to cover the thighs. Below the cuirass from his waist to his shins there was a long silver scale-mail skirt, split down the middle and backed by dark leather and silk: silvery greaves, bracers, and and light pauldrons completed the effective armour, as well as a light flap of scale-mail to protect his throat: he never used a helm, considering it restrictive to his vision as an archer. His black gloves and boots were reinforced to handle his bow: his garments beneath his armour were of black silk, and the cloak he wore in open battle was also black, clasped with the image of a silver-leafed laurel wreath.

While among the Galadhrim, serving as a marchwarden on the eastern fences, he discarded his black attire for the greys of Lórien: while serving, he covered his face with a grey kerchief, to continue his mourning.

Faenor’s armour was simple: a grey surcoat of silk, unadorned by device or decoration, covered a silvery mail shirt which ran down to his shins, splitting past the hip to allow freedom of movement. Below the surcoat from his waist to his shins there was a long silver mail skirt, split down the middle and backed by leather and silk: silvery greaves, bracers, and and light pauldrons completed the effective armour, as well as a light flap of mail to protect his throat: he rarely used a helm or coif. His black gloves and boots were reinforced to handle his bow: his garments beneath his armour were of grey silk, and the cloak he wore in open battle was grey, clasped with the image of a silver-leafed laurel wreath.

When not serving, he wore simple black garments, in mourning for lost Doriath, and for Dior and Nimloth, whom he could not save.

Multiple stories exist as to the manner of his end: according to movie-friendly lore, he was one of those Galadhrim that marched to the Hornburg in aid of Rohan and ultimately perished. According to the books, he would have died in the Battle-under-Trees during Galadriel and Thranduil’s assault on Dôl Guldur, fighting the guards of Khamûl the Ringwraith. And some say he might have died earlier, during the War of the Last Alliance, in the siege of Barad-dûr, when he served as one of the messengers of Gil-galad the Elvenking. In no case did he survive the War of the Ring. His sister, Anoriel called Mormeril, was his only surviving relative.