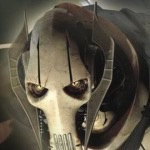 Hello there! I am General Grievous1138, your Supreme Overlord.

I have been on this wiki nearly since its creation (nearly five years now!) For most of that time period, I've proved to be the most ruthless admin we have, and I still hold the record for most bans performed out of the entire staff, by a long shot. But don't worry, I'm not going to hurt you. I have... other uses for you.

I am, naturally, a massive Tolkien fan. I've read LOTR itself over a dozen times, and have also read the Hobbit, the Silmarillion, the Children of Húrin, Beren and Luthien, and some of the Unfinished Tales. I'm also the biggest Star Wars nerd you'll ever have the misfortune of meeting. Not only have I seen all the films many times (though that business in The Last Jedi doesn't count), but I'm also extremely well-versed in the Expanded Universe - both new Star Wars Canon materials and in particular Star Wars Legends. Other interests of mine include Battlestar Galactica, Bionicle, the English language in general, and writing.

Some of you may know me from the mod's Official Server, which I can be found on more often than not. There, I am the War Chief of Moria and a proud leader of Gundabad. If you're ever on at the same time as I, I'm always happy to show people around my dark realm.

I will be happy to answer any questions you have. Simply post them on my talk page, and I will answer as soon as I can.

I am in charge of making sure every single biomes page is 100% up-to-date. Thankfully, this project is going well.

I have built, in singleplayer, a complete map of Mordor that is available for download and exploration, which includes all major builds and much, much more. See the blog tab of my userpage for more.

Obviously, I'm a writer, but my work extends far beyond what I do on this wiki. I've been paid to work as the scriptwriter for the YouTube channel Geetsly's , I wrote a lot of the official mod lore featured on the Lost Chronicles page, and I do a ton of other writing projects on the side, including my short novella Star Wars: Grievous and The Complete Guide to the Clone Wars, a 260+ page book that details the entirety of the Clone Wars, complete with maps. I would be more than happy to send you some of my work, and if you're interested feel free to drop me a message.

I am the owner of the official Wiki Discord, where I can usually be found hanging around #other-stuff, #debate, and #star-wars.

Favorites in the mod Edit

Retrieved from "https://lotrminecraftmod.fandom.com/wiki/User:Gen._Grievous1138?oldid=610677"
Community content is available under CC-BY-SA unless otherwise noted.