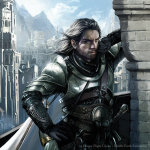 aka Imrahil the Fair

Please note that the most incredible song in the history of the universe can be viewed here: https://youtu.be/w5jwxrTqoEA

Hello, Person, it is great to see you! Finally got around to looking at my profile, eh? Well here it is!

"And last and proudest of all, Imrahil, Prince of Dol Amroth, kinsman of the Lord, with gilded banners bearing his token of the Silver Swan, and a company of knights in full harness riding grey horses; and behind them seven hundred men-at-arms, tall as lords, grey eyed, dark haired, singing as they came."

-about the company of Prince Imrahil, Minas Tirith, Return of the King

It began upon a beautiful summer's day when I got my first pirated game: Minecraft. I was greatly intrested in the game but didn't want to buy it until I had tried it, so I had my cousin get a cracked copy. I searched for all kinds of mods but most of all for a good LotR mod. After searching far and wide I finally found this mod. It was then just Beta 9.2, and many of the features were not there yet. I played for quite a while until I ran into a problem: every time I left the game it reset the alignment. My cousin (who also had the mod) said that this was a normal problem with cracked versions, so I was grudgingly forced to actually buy a copy of Minecraft. I then had another problem: I didn't know how to craft anything! Thus I discovered this wiki in its earliest stages, and it has been a great help to me ever since. Fast Forward a year and a half later, I have finally decided to get an account here, use the forums, and contribute to this wiki that has been such a help to me.

I might very well be the biggest nerd on this wiki. I love programming and have read LotR seven times now (And I'm not exaggerating).

Favorite Book: Return of the King

Favorite Movie: Return of the King

I have a good deal of experience in Java, xml, Python, and SDK.

I am currently producing a LotR mod for Civilization IV (If you want a copy just leave a message on my board).

If I could live anywere in Middle-Earth it would be Dol Amroth.

Typing (Imrahil) in chat will bring up the emblem of the silver swan.

In case you haven't guessed yet, I have a strange obsession with Dol Amroth.

I am obsessed with gameing, and often find myself spending all my spare money on them. I have a massive gaming library, including Civilization 2-5, Age of Empires 1-3, Medieval II, Rome: Total War, Minecraft, Terraria, all of the Lego games (Including Lego Island), and many more.

I live in the USA.

"And then a trumpet rang out from the citidel, and onto the field rode the swan-knights of Dol Amroth with their Prince and his blue banner at their head. 'Amroth for Gondor!' they shouted 'Amroth to Faramir!' and like thunder they broke upon the enemy. . . Then the swan-knights returned, and at the rear was the banner of Dol Amroth, and Prince Imrahil. And in his arms he bore the body of his kinsman Faramir, found stricken upon the field. . .Only the charge of the swan-knights saved him from the red southron sword that would have hewn him as he lay." -about the sortie sent out from Minas Tirith, Seige of Gondor, Return of the King

"Tirelessly Gandalf rode from citidel to gate, from North to South about the wall; and with him went Prince Imrahil in his shining mail. For he and his knights still held themselves like lords in whom the race of Numenor ran true. Men that saw them wispered saying 'Belike the old tales speak well; there is elvish blood in the veins of that folk, for the people of Nimrodel dwelt in that land long ago' And then one would sing amid the gloom and staves of the Lay of Nimrodel, or other songs of the Anduin Vale out of vanished years" -Siege of Gondor, Return of the King

If you read this whole thing you deserve a cookie.

Retrieved from "https://lotrminecraftmod.fandom.com/wiki/User:High_Prince_Imrahil?oldid=435858"
Community content is available under CC-BY-SA unless otherwise noted.