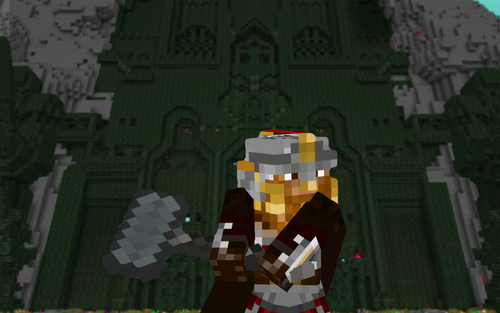 Hello Person! How are we all? It's me, Lord Dain with the misspelt Awsome, Lord of the Iron Hills, King Under the Mountain and the Ruler of Durin's Folk (a highly contested position with other users)

I was born quite some time ago in the Iron Hills, as a stout little dwarven prince. When my father died I became Lord of the Iron Hills and immediately put my people on a terrible war against the Orcs. Many Orcs and Dwarves died in this tragic series of battles but the Dwarves emerged victorious, taking back the ancient Dwarven Kingdom of Gundabad, and renaming it Dwarfabad. While my kin was recovering however, new orc armies spilled out of Angmar, taking my army by surprise. We tried to retreat but it turned into a terrorfing route into the fortress. The orcs laid siege to to it and we were stuck for 4 years. Suddenly, an army of Dwarves from Ered Luin, our cousins, came out and in a swift charge wrecked many an orc. But as the surprise wore down the batte turned against the blue dwarves, so we swell charged. With a great spray of crossbow bolts we ran out through our gate and battered the enemy flank, completely wiping out the bodyguard and sending the orcs in retreat. Many dwarves were dead by now and many more were injured many very tired,so it was not good news that new waves of Goblins were coming out from the mountain holes, charging down thee steep slopes. 3 hours later the battle was still raging when the trolls came. Many dwarves were ended by these foul beasts of evil. We eventually killed them and the orc waves stopped. The battle was over. But we had lost many Dwarves. Half of all our troops were dead, a quarter more injured. I had lost 5 of my best captains, the Blue dwarves their leader. But nearly all the orcs to were dead, many more than we had lost. So we went on a huge invasion, into the fell land of Angmar and with hate in our hearts we destroyed it. We burned every camp a village and fortress we came across and ruined to entire land. That was the Dwarven Angmarian War.I returned home to the Iron Hills with victory. The Blue Dwarves had the mountains of Angmar and dug many rich mines there. We resettled the Grey mountains and found there were no Drakes left. Now I live in Erebor (which is now about 2 times bigger than when Thror ruled it) and everything is perfect!

*I have lived in 5 countries

*I used to think Gandalf and Galadriel were siblings

*My favourite food is Caprese Salad.

*My first comment was about Saurons tower on the Mordor Orc page, made on the 5th of May.

The world was young, the mountains green,
No stain yet on the Moon was seen,
No words were laid on stream or stone
When Durin woke and walked alone.
He named the nameless hills and dells;
He drank from yet untasted wells;
He stooped and looked in Mirrormere,
And saw a crown of stars appear,
As gems upon a silver thread,
Above the shadows of his head.
The world was fair, the mountains tall,
In Elder Days before the fall
Of mighty kings in Nargothrond
And Gondolin, who now beyond
The Western Seas have passed away:
The world was fair in Durin's Day.
A king he was on carven throne
In many-pillared halls of stone
With golden roof and silver floor,
And runes of power upon the door.
The light of sun and star and moon
In shining lamps of crystal hewn
Undimmed by cloud or shade of night
There shone for ever fair and bright.
There hammer on the anvil smote,
There chisel clove, and graver wrote;
There forged was blade, and bound was hilt;
The delver mined, the mason built.
There beryl, pearl, and opal pale,
And metal wrought like fishes' mail,
Buckler and corslet, axe and sword,
And shining spears were laid in hoard.
Unwearied then were Durin's folk;
Beneath the mountains music woke:
The harpers harped, the minstrels sang,
And at the gates the trumpets rang.
The world is grey, the mountains old,
The forge's fire is ashen-cold;
No harp is wrung, no hammer falls:
The darkness dwells in Durin's halls;
The shadow lies upon his tomb
In Moria, in Khazad-dûm.
But still the sunken stars appear
In dark and windless Mirrormere;
There lies his crown in water deep,
Till Durin wakes again from sleep."