The Lord of the Rings Minecraft Mod Wiki
Register
Don't have an account?
Sign In
Advertisement
in: Male users 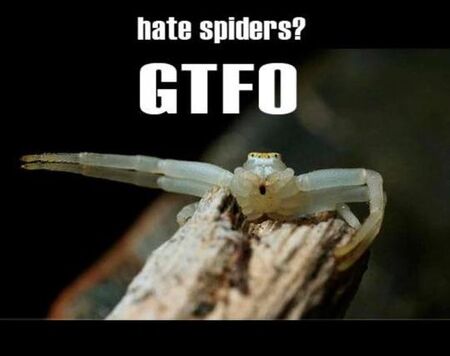 Some things you may be wondering about me[]

*May I also add that some of you might have certain opinions on the appearance of L. periphragmoides. Know that I did not choose my name based on that. I simply find that species and its relatives fascinating in general, and the name sounds cool as well.

Why do you like spiders so much? I feel that they are horrendously misunderstood creatures. People think only of what small harms or discomforts they cause to us (a small counter for their many benefits), but completely dismiss the amount that they likely mercilessly slaughter (yes, I said slaughter, as spiders are animals with feelings, just like dogs and cats, and just like ourselves in many respects).

How do you create the clear background NPC images? I created a page on this. I'll add a link once I get the hand of wiki code.

Some things about myself[]

I am a relatively new user to the mod, but have been reading this wiki 3 years prior to actually creating an account and installing the mod. I enjoy it greatly, and my favorite aspects are as below:

Weapon: Gondolinian Sword (don't know whether the hole is intentional or not however), or Gundabad Uruk Bludgeon

Mob: Mirkwood spider (one of the first things anyone will find out about me is that I am an enormous arachnophile)

Here are a few other things about me:

- I am an ameteur modder myself (the foundations were built by Youth Digital's Mod Design 1 course). Since then, I have been gradually advancing my modding capabilities. I might attach some screenshots later.

- I am very passionate about mycology (study of fungi), and have recently found what is suspected to be a new species of mushroom. I also found what could possibly be the first record of the stinkhorn Clathrus archeri in mainland Queensland. I have been given private visits to the Queensland Herbarium.

- I also have a deep love of spiders, having kissed a huntsman on school camp at Moogerah Peaks, and thrice let a Golden orb weaver (Nephila plumipes) walk around on my face.

- I have a pet scorpion, python and centipede, as well as a large fishtank containing 8 fish (all of which are catfish, and one of them looks suspiciously like a Sareng catfish, featured on River Monsters).

- I enjoy sketching a drawing various plants, animals and fungi.

- It was I who suggested and provided the textures for the Gundabad Uruk Pike, Spear and Daggers, and additionally suggested Tauredain Bludgeons, Battleaxes and Pikes, along with the Gundabad Uruk Bow, which were implemented with slightly different textures.

- After 5 years of playing Minecraft, I still use the default Steve skin.

- I am an outspoken atheist

- In sympathy with Mevans and Grievous, I support painfully incinerating those who ask for Gandalf.

- I know NOTHING about sports and popular culture.

My friends on this wiki (in no particular order)[]

SamwiseFilmore - This is because of images, right? :P

Catfishperson - Who dose not hate spiders.

Campinator(when he isn't screwing up with images)

Deadly Forest - Who love all your textures

Blitz Air - Who is interested in all his pets

Dinopizzagamer - Who also read this page

Lord Poniros - Who felt he earned a cookie after reading this page.

Lord Epicus!- who has such a high resistance to boredom, he felt free to add his name to the list.

High King Ithilion, who is jealous because Lys's superior textures get added instead of his.

Esquire Mortimer Leclerc, Master Brewer, who found himself also fascinated by centipedes, despite being known to stay indoors for fear of insects

(If you have such a high resistance to boredom to read this whole page, feel free to add your name to this list) 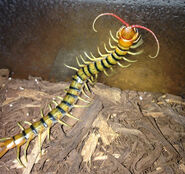 My first pet centipede, which I have owned for four years. 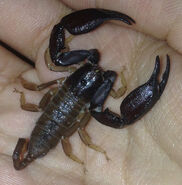 My (now deceased, as of May 17th, 2016) scorpion having a rest on my hand. When he died, even I was shocked by how sad I was, so I performed a Boromir-style funeral (floating him down a creek in a large seed pod boat).

My second, much larger centipede.

Another centipede of the same species as the previous (Ethmostigmus rubripes). I plan to start breeding these.

One of my E. rubripes centipedes chomping on a cricket.

A Nephila spider on my hand.

My recently acquired sand scorpion (Urodacus novaehollandiae). I plan to breed these as well.

A smaller centipede species, Cormocephalus westwoodi, and much shyer than my other centipedes.