Just Chilling In Near Harad

Hello Person! My name is Ronshol The Black. I am just like many of you all and want to help this wiki be the best it can be. I have played this mod since September 2014, where the Public Beta 20 update had come out. However, I have known of this mods existence since July 2013.

This mod is my most favourite mod, and I have played it daily ever since I first played it. I try to remain neutral in anything that happens. I can get carried away if something really catches my attention.

I have been on this wiki since August 2014, this may seem odd to you, as I have stated that I started playing in September 2014. However, I did not know how to install mods back than, but I saw how amazing this mod was and I decided to try and learn how to install mods. Which I promptly did. I made my wiki account in April to make my contributions more noticed. I am nearing my 3rd year of discovering this wiki and my second year of being here with this account.

If you have any questions or concerns, feel free to message me on my wall. I know a fair bit of wiki code.

I have created a few articles on the wiki including:

-I once travelled from the Shire to Mordor, without anything but boots! I however did die... mostly from players because I was playing on the Official Server

-I have always liked Near Harad

-I have always been an enemy of the Wood-Elves when I play.

-I like creating governments, military ranks, and roles when I play this mod

-I'm not that into PvP, If you challenge me I'll happily duel you though.

Have a kebab if you read this far! 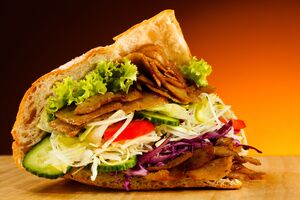 Also, look at the Togepi GIF!