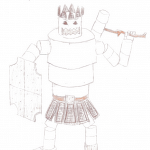 The Lord of Autumno

I started playing this mod sometime in March of 2017. A friend of mine had shown it to me back when Hobbit Holes still had vanilla Oak Doors, but I was unable (for real life reasons) to play it for a long time.

I am a big Tolkien fan, and have read the Silmarillion, The Lord of the Rings, and The Hobbit (my personal favourite), and look forward to when I have time to read some more of his writings.

While I have not been playing LotR Minecraft for very long, I have been playing Vanilla Minecraft since Alpha. I do enjoy vanilla, and have since I first played it, but in recent years, it has been much less enjoyable, mainly because Mojang has fallen under the "Bigger and Newer is Better" fad. This makes the LotR Mod much more pleasing, as it has the same feel that Minecraft used to have, and has Middle-earth added in. What's not to like?

Retrieved from "https://lotrminecraftmod.fandom.com/wiki/User:S%27moregoth?oldid=573107"
Community content is available under CC-BY-SA unless otherwise noted.