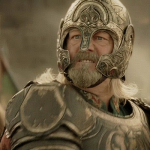 A pic of me gravely contemplating life.

Hello there, and welcome to my user page! I am Théoden, son of Thengel, and King of Rohan. Here's a very short biography: I was raised in the White Mountains, but after my father Thengel (the king) died, I came to Edoras to live in Meduseld. My sister, Theodwyn, also lived with me there, but after she and her husband died, I adopted their children Éomer and Eowyn. My wife Elfhild died giving birth to my son Theodred, who also died. Sad :,-(. My son Theodred also died in a battle at the Fords of Isen. I was poisoned and corrupted then by Grima, an advisor of mine, but Gandalf the White redeemed me immediately prior to the War of the Ring. I fought at both the Battles of Helm's Deep and the Pelennor, although I died at Minas Tirith challenging the Witch-King. However, I have returned from the dead to play my favorite mod in my whole Minecraft history ;-). I particularly enjoy building Rohirric and Tauredain structures, and killing hosts of Orcs and Wargs in Isengard, Utumno, or Mordor. I also love Star Wars, Hunger Games, and listening to music. My favorite factions in the mod are Utumno, Rohan, Gondor, and the Lothlorien Elves. My favorite armor set is Gondolinian, and my favorite weapon is the Staff of Gandalf the White and all Rohirric ones. I have read The Hobbit, the Simalrillion, The Lord of the Rings, and the Children of Hurin. Some of my preferences in Middle-Earth include Tulkas as my favorite Vala (although Eönwë and Ulmo are close seconds), Melkor as my favorite villain, Radagast as my favorite Istar, and Fingolfin is my favorite Elf. My favorite Hobbit is Samwise Gamgee. As you may suspect, however, my favorite Tolkien character overall is Théoden.

I play no servers at the moment, although I played on Dominion as the Grand-Duke of the Anduin Vale under Théoden-Arvasil, the King of Rohan. My username is Engstad. I may play on other servers in the future. I play mostly single player. My chief world, which is my seventh survival world for LOTR, is the world I spend most of my time on. I live in a mansion in front of the village of Lingby at Eastmark. I'm a horrible builder as far as large structures go, so I haven't built any major structures save Woldhall on Dominion and the lesser-known Hill-Troll Chieftan Hole, a pit going down to bedrock that I spawned the Mountain Troll Chieftan in. I have an arsenal of mithril weapons, a Balrog whip, and many trophies from Uruk-Hai, Mordor Orcs, Dol Guldur Orcs, and Dunlendings. I have also played as a Tauredain and a Gondorian, although my favorite faction has been Rohan ever since I started playing the mod. Amusingly, I knew nothing about LOTR before starting the Mod. The mod immersed me in LOTR, not vice versa.

As for my actual background with LOTR, there is quite a lot to say. I have several relatives who like it, although the LOTR mod was installed by my brother out of curiosity. After playing the Mod, I watched the LOTR movies and then read the book (I had read The Hobbit far before I had gotten the mod). I have since gotten a pristine 50th-anniversary one-volume copy of LOTR and also several other Tolkien novels, including the Children of Húrin, Sir Gawain and the Green Knight, the Silmarillion, Unfinished Tales, and the Tolkien Reader.

My contributions on the Wiki extend mostly to the correction of grammar, since I am a devoted English student. Other than that, I just comment on pages and forum threads. I've made only a few suggestions (although one of them, the suggestion for chisels, was added into the mod in Beta 30). I prefer reading other people's suggestions by far.

Some fun facts about me:

I love drawing and I have been at it since I could pick up a pen.

I can sing/rap the whole musical Hamilton.

I love to play basketball, and I am a particularly big fan of the Cavaliers.

I never go to the bathroom at school. I don't even know what most of the insides of the bathrooms at my school look like.

I am obsessed with Star Wars and I remain a very well-learned Star Wars historian even now, since I have also been learning lore for LOTR.

When I took the Myers-Briggs personality test, I got Mediator (INFP-T), which was also attributed to J.R.R. Tolkien and Frodo. Wow. The hero and the creator.

Comedy is my favorite form of humor (memes being a close second) and I particularly like Nate Bargatze, Ellen DeGeneres, and Jim Gaffigan.

"I love deadlines. I love the whooshing sound they make as they fly by." -Douglas Adams.

"The good news is, there are only two pieces of bad news." -Aziz Ansari on Parks and Recreation.

"I want Mevans to add Gandalf." -definitely not me.

"There's no such thing as impossible, only improbable." "What about sailing to America?" "Oh, no, that's impossible, son. You should know that." -Hiccup and Stoick the Vast in How to Train Your Dragon.

"I have always thought it my duty to exhibit things as they are, not as they ought to be." -Alexander Hamilton.

"Welcome to mi casa. It's French for front door." -Fred.

"You have no power here." -Me when I see a teacher outside of school.

"It unscrews the other way." -The usually strict Professor McGonagall assisting Peeves the Poltergeist in unscrewing a chandelier.

"Don't cry because it's over, smile because it happened." -Dr. Seuss.

"If you come in second place, remember this: you're just the best loser! -Tiger Woods.

Retrieved from "https://lotrminecraftmod.fandom.com/wiki/User:TheodenOfRohan?oldid=496492"
Community content is available under CC-BY-SA unless otherwise noted.