The Lord of the Rings Minecraft Mod Wiki
Register
Don't have an account?
Sign In
Advertisement
in: Dorwinion, Structures, Captain Structures,
and 5 more

Edit
watch 02:58
No Man's Sky Update - The Loop
Do you like this video?
Play Sound

Vintner Guard Camps are randomly generated structures that spawn naturally in the land of Dorwinion. They are the only military structures where players can hire the soldiers of Dorwinion.

The main tent, housing the captains, is built with random wool blocks and the clay tiled roof is supported by wooden beams. Inside the player can find two treasure chests, one bed, a command table, two barrels with wine, and both a vanilla crafting table with a Dorwinion Crafting Table.

Scattered around the main structure, there are the tents used by the common soldiers. It is also built with wool blocks and wooden beams for support, and inside one can find a treasure chest, containing food, arms, and weapons.

The camp is garrisoned by Vintner Guards and Vintner Guard Crossbowers. Each smaller tent comes with one soldier, but in case of their deaths, the NPC Respawner inside the main tent will spawn more soldiers as it is necessary.

Within the main tent, one can also find the military captains of Dorwinion. Although a Vintner Guard Captain will always be found here, Bladorthin Captains only spawn in some of the camps. With enough alignment, a player may hire troops from the human or the elven captain. 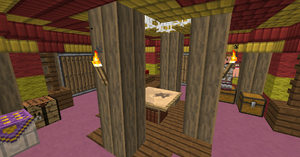 Inside the officer's tent. 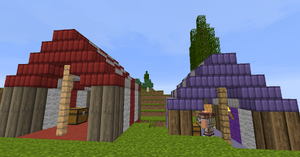 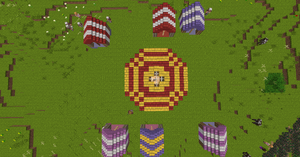 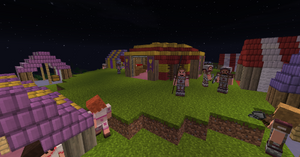 The camp at night.